Have an Android phone or tablet with a blazing fast CPU… that you don’t need to run at blazing fast speeds all the time? While Android is generally pretty good about only using as much CPU power as needed to get the job done, some folks like to fine-tune things to improve battery life or boost performance. 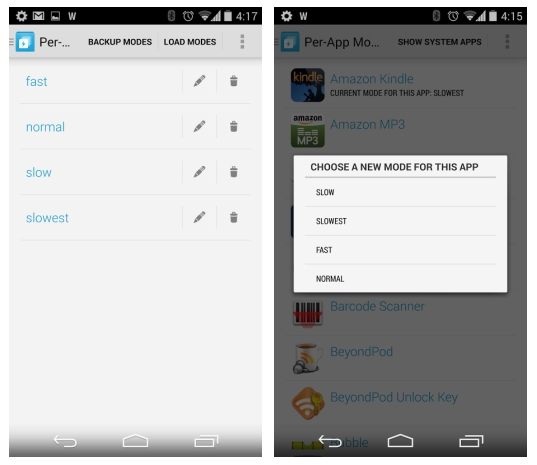 The app is called Per-App Modes, and it’s available from the Google Play Store for less than $3.

You can create custom profiles by setting the maximum and minimum CPU frequencies and max GPU speed. Advanced users can also change the governor and choose more options.

Once you’ve got a few profiles, you can choose which apps to use each profile for. Want to limit your CPU speed to 600 MHz while reading eBooks using the Kindle app, but want to hit 2.2 GHz when playing Need for Speed? Just create fast and slow profiles and apply them to each app.

Per-App Modes should show a brief pop-up notification when you start an affected app and the mode switch kicks in. You’ll also get a notice when you exit the app and your device returns to its standard profile.

Just keep in mind — sometimes telling your system to slow down will actually hurt battery life rather than helping it. That’s because your device should be able to fire on all cylinders to complete a job quickly and then return to a slower state once the job’s complete. Telling your device to run at a lower speed means that the processor might have to work longer to complete the same task — and that can take more energy than you’d expect.

The nice thing about Per-App Modes is that everything is easily reversible. If you find your performance deteriorates after making some changes, you can always delete them or remove the app.

Per-App Modes should work on most rooted devices running Android 4.0.3 or later. If your device isn’t rooted, it won’t work at all.