Just a few weeks after announcing that the upcoming OnePlus One smartphone would be powered by a Qualcomm Snapdragon 800 processor, the folks at OnePlus have updated the spec sheet. Now it looks like the phone will ship with a more powerful Snapdragon 801 chip.

The new processor supports faster clock speeds and speedier memory than the Snapdragon 800 chip, which should offer at least a modest performance boost. 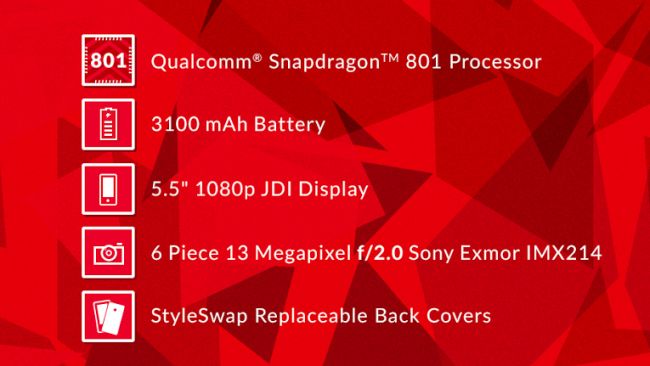 OnePlus has been promising to release a “no compromise” phone at an affordable price, with features including a 5.5 inch full HD display in a phone about the size of a typical 5 inch handset.

Other features will include a 3100mAh non-replaceable battery, a Sony Exmor IMX214 13MP camera, and swappable back covers that let users change the look of the phone.

The phone will be available with 16GB or 64GB of storage, it’ll have stereo speakers, and it’ll support “always listening” voice-action software. It’ll ship with CyanogenMod’s custom version of Google Android.

OnePlus is a Chinese startup founded by former Oppo employee Pete Lau. The OnePlus One will be the company’s first phone, but it looks like the company is packing it with geeky specs designed to appeal to Android enthusiasts.

While the initial choice of a Snapdragon 800 CPU offered a balance between performance and the ability to get the phone to market quickly, it appears OnePlus may have underestimated the availability of more powerful Snapdragon 801 components at the time. The spec bump means the phone will have the same processor as the Samsung Galaxy S5 when the OnePlus One launches.

via Phandroid and OnePlus Forums