Ready for another round of new Chromebooks? Samsung is launching two new models as its Chromebook 2 series. There’s an updated 11.6-inch version and now a shiny new 13.3-inch version.

Both cost less than $400 and both have consumer-ready looks even though Samsung thinks they’re more likely to be used by students than by the average Joe. That’s just fine! Kids need nice-looking laptops for school, too. And the classroom is the perfect environment for Chrome OS to flourish. 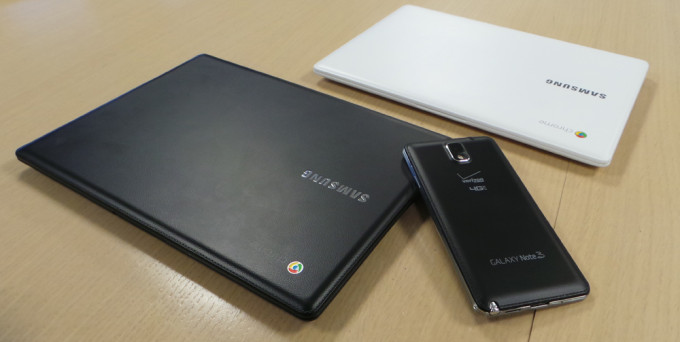 The Chromebook 2 series borrows design elements from other higher-end Samsung laptops as well as Samsung smartphones and tablets. From the Series 9/ATIV Book 9 we get the distinctive swoop and curve at the edge that keeps the Chromebooks looking slim.

From the Galaxy Note 3 and Galaxy Tabs we get the leather-esqe cover texture complete with faux stitching on the edges. I’ve mentioned before that I’m a fan of this particular design choice, but I know others don’t think it looks so hot (Editor’s note: count Brad in the latter group). There are practical reasons to appreciate it: the texture makes it harder for the Chromebook to slip from your hands and it’s semi-fingerprint resistant.

Both the 11.6-inch and the 13.3-inch Chromebook 2s come with the usual assortment of ports–full HDMI, USB 2, USB 3, headphone/mic. The only drawback is that the SC card slot only takes microSD. This was done to save space, according to Samsung reps, but I still think it’s not a great choice. There are quite a few full-size SD cards in use.

The slim, lightweight design of both is thanks in part to the Exynos 5 octa-core processor inside (1/9GHz for the smaller one, 2.1-GHz for the larger) which is fanless, thus requiring less girth. Just as with octa-core smartphone and tablet CPUs, this one has a littleBIG architecture, so every task won’t active all 8 cores, cutting down on power consumption.

Samsung claims the Chromebook 2s will last 8 and 8.5 hours (respectively) on battery and possibly longer if your tasks aren’t processor-intensive.

The light weight and a slim profile are appreciated — but not at the expense of full-sized ports. While the USB ports and HDMI port are full-sized, the new Chromebooks have microSD card slots rather than the larger SD card slots you’d normally use for camera storage cards.

Samsung has finally caved in and started producing keyboards with slightly concave keys. The first time they made a big deal out of it was when introducing the new ATIV Book 9 at CES. Those keys are on the new Chromebooks as well.

The new shape helps with accuracy and the overall feel is good. The keys have just enough spring to them, though they aren’t as comfortable to type on as the ones you’ll find on a ThinkPad. I also found the key size and spacing just right. 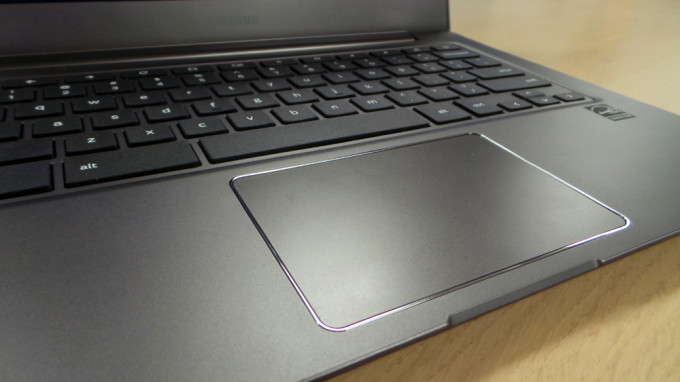 The touchpads didn’t betray any problems during my short hands-on time. Responsive, accurate, and wide enough for proper use.

The 13.3-inch Chromebook 2 may end up being more popular overall since that size is more popular. Plus, it has all the bells and whistles: 1080p display, 250 nit brightness, and a more powerful octa-core processor with better graphics than the 11.6-inch version. This model also features a 720p webcam with a dual-array mic (for enhanced noise-canceling), features which make it the first Google Hangout certified Chromebook. 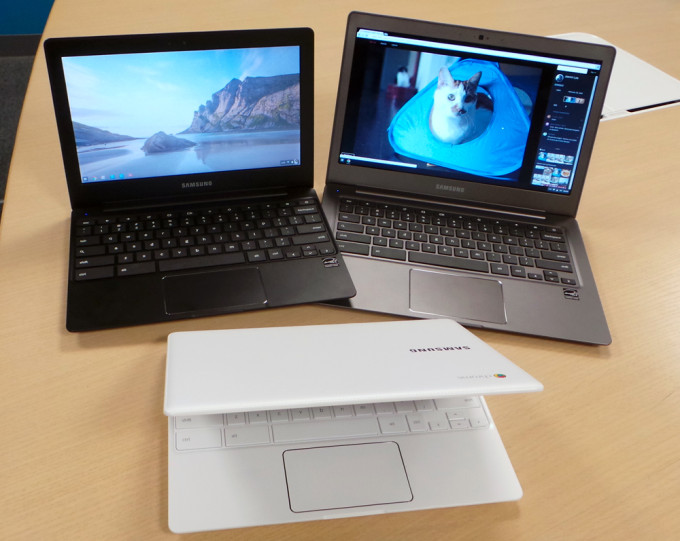 Of course, I’m sure many of you are like me and prefer the 11.6-inch size in general. This model weighs 2.5 pounds, which is less than the average netbook of old, and feels lighter than the size would indicate.

The 1366 x 728 resolution is par for the course with this size display in this price range and the brightness is nothing to complain about. I would just personally like to see the fancier specs in the smaller size for those of us who prefer the nice balance 11.6-inch models offer between compactness and screen real estate.

Speaking of the screens, both are glossy. They have anti-glare coatings that work all right under fluorescent office/class lighting. The viewing angles are wide enough that you’re not confined to a narrow sweet spot while still not being quite as wide as I would like or as wide as you’d get with a matte display.

For $319 (11.6-inch) and $399 (13.3-inch), my first impression is that the Samsung Chromebook 2 look like fine machines for reasonable prices. Especially if the performance and battery life live up to Samsung’s claims. The few drawbacks in design aren’t dealbreakers, and the improvements over the last generation are quite welcome. I just hope that the matte display will make a comeback next time around.

9 replies on “Hands-on with the Samsung Chromebook 2 Series”