Google’s Chromecast may be designed to bring online video and audio to your TV. But that doesn’t mean that’s all it can do.

Want to use a Chromecast to play games on your TV? There are apps for that. 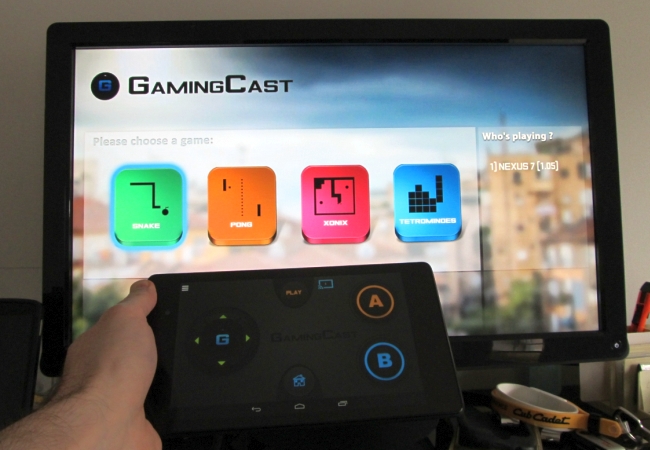 GamingCast is an Android app that lets you play a handful of classic games on your TV while using your phone or tablet as a remote control.

Here’s how it works: Download the $1.50 app from the Google Play Store and fire it up on your mobile device. Hit the cast button to pair it with your Chromecast, and then use the on-screen buttons on your phone or tablet to control the action on your TV.

That’s it. I was worried there’d be too much lag for GamingCast to really work — when I hit pause while using Netflix, for instance, I usually have to wait for a second or two before anything happens. But GamingCast seems to work quickly enough for at least basic gaming.

At launch GamingCast has just a few games and they’re pretty old-school titles including Snake, Pong, Xonix, and a Tetris clone called Tetrominoes.

I took each game for a spin and while Pong and Tetris were pretty sluggish, Snake was actually pretty easy to play. The game requires some split-second timing to work, and I didn’t run into any walls due to lag (only due to incompetence).

Does this mean we’ll eventually be able to see first-person shooters, role-playing, strategy, and adventure games working on the Chromecast? It’s tough to say. But the little TV stick does have the hardware to support 3D and HD video and GamingCast shows it’s possible to play at least some games using Google’s little media streamer.

The developer of GamingCast also plans to add support for multiplayer gaming in a future release.

Don’t want to pay $1.50 to play some very old games on your TV? Pixocast has a free, browser-based tool that lets you play Snake, Tetris, Asteroids, and Flappy Bird clones using a web browser.

One reply on “GamingCast brings classic games to Chromecast”