Tired of playing handheld games on your smartphone, Nintendo 3Ds, or PlayStation Vita? You could build your own handheld game system with a Gameduino. Or you could buy a system like the Gamebuino which comes with all the hardware you need… but which is designed to let you develop your own games.

The Gamebuino is a credit card-sized retro-style game console based on Arduino. Developer Aurélien Rodot  is running a crowd-funding campaign to bring it to market. But the $4300 goal has already been met, which means that if you pledge about $49 today, the goal is to ship your Gamebuino in early July. 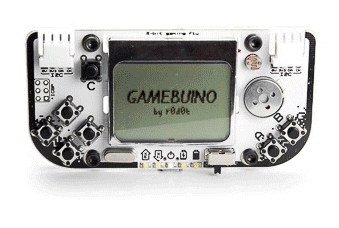 A Gamebuino system features an 84 x 48 pixel monochrome display with an automatic backlight, a speaker, micro SD card slot, and a 16 MHz Atmega 328 processor. It has a 240mAh battery which should be good for up to 24 hours of run time.

On the sides of the display you’ll find direction buttons and A/B buttons. There’s also a port that you can use to add extra modules to add an accelerometer or wireless capabilities. You can use the same port to connect multiple devices together for multi-player games.

It’s not the hardware that makes the Gamebuino special though. It’s the software library which is designed to help you develop your own games. It includes examples of a few games including Pong, Tetrist, and more advanced apps such as an action game called AlienKiller. But ultimately the goal is to encourage uses to create their own games. 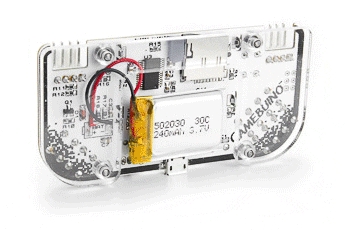