FreedomPop’s claim to fame is the company’s low-cost wireless plans. But now FreedomPop is jumping on the privacy and security bandwagon, offering a new phone that it says offers more secure communications.

It’s called the Privacy Phone, and while the hardware is kind of dated, it’s loaded with features to help keep your voice calls and text messages from prying eyes. 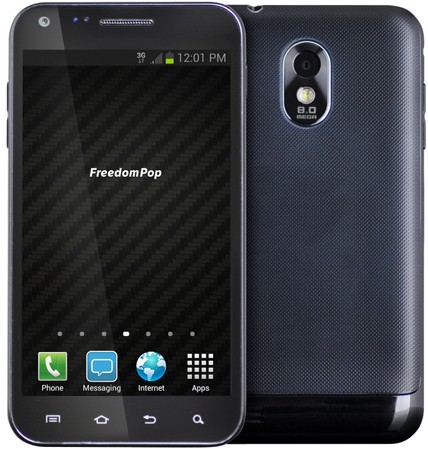 The Privacy Phone is basically a modified Samsung Galaxy S II Android smartphone that sells for $189. It has a 1.2 GHz Samsung Exynos 4210 dual-core processor, 16GB of storage, a microSD card slot, WiFi, Bluetooth, and an 8MP camera. The phone works on FreedomPop’s wireless network, which basically means it works on Sprint’s wireless network, but relies on WiFi whenever available.

What sets the Privacy Phone apart from a normal Galaxy S II is the 128 bit encryption used for phone calls and text messages, and VPN service to allow for anonymous web browsing and internet use. Note that a VPN isn’t a full-proof way to protect your privacy, but it’s probably better than the software that comes with most phones.

FreedomPop’s new phone isn’t the only Android phone aimed at the privacy-minded. The Blackphone is a $629 handset which comes bundled with secure software and access to secure communications services. But FreedomPop’s Privacy Phone is a lot cheaper — especially when you consider the company’s core business model.

Buy a FreedomPop hotspot and you can get 500MB of data per month for free. The company also offers phone plans that start as low as $5. The Privacy Phone is sold as a contract-free device which comes with 3 months of unlimited talk and text and 500MB of data. After that, you can pony up for a month-to-month plan — and if you don’t want the transaction to be traceable, you can pay in Bitcoin.