Google’s working on a modular smartphone platform; ZTE has a similar concept in development, and Razer is thinking about building a modular gaming PC. So what’s next for the modular device space? How about a modular smartwatch?

The folks behind Blocks want to build a modular device that you can strap to your wrist and use just the way you’d like. 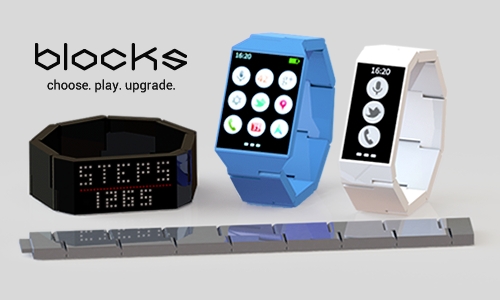 Want a heart rate monitor, GPS, and activity tracker but don’t need a display? No problem. Want an E Ink screen and a mic for voice controls? Just choose your modules.

That’s the idea anyway. Right now there’s no device you can go out and buy and there are no modules. But the team says they’re working on a prototype and plan to launch a crowdfunding campaign eventually in hopes of bringing their modular smartwatch to market in 2015.

While there’s not a lot of space to work with on a wristwatch, the individual blocks would fit onto the wrist strap, allowing you to fit a number of blocks or modules together to make a wearable device.

Blocks could offer features ranging from displays to microphones to temperature sensors and activity sensors. Need longer battery life? There could even be an extra battery block.

Right now when you buy a smartwatch you’re limited to the features offered by the manufacturer. While software updates and third party apps can help use that hardware in different ways, if your watch doesn’t have a camera, no amount of software will change that. And if you’re not happy with the CPU speed or the display quality, you need to buy a whole new watch.

A modular approach means that not only can you choose the features you want when you buy the device, but you can also upgrade one component at a time. Need a better camera? Just buy one and add it to the watch. Want a faster processor? Buy the latest module.

Theoretically that could save you money and cut down on electronic waste… and it also opens up the door for the possibility of third-party accessory makers getting in on the action.

All told, the Blocks project is pretty ambitious, and the developers don’t have the kind of clout as Google or other companies currently working on modular products. So even if Blocks does make it to market, it seems like a bit of a long shot that there will be a huge selection of modules for the smartwatch anytime soon.

But a long shot is better than no shot at all… after all, Google’s Project Ara design was inspired by a project called Phonebloks that was little more than a concept initially.

3 replies on “Blocks is a modular smartwatch concept (could become real in 2015?)”