Asus appears to be working on an unannounced device called the Asus Game Box, and all signs point to it being an Android-powered box that you can plug into a TV to play games on a big screen.

Benchmark results revealed the basic specs for the Asus Game Box in February, and now a Bluetooth listing provides an early look at what may be the wireless controller for the box. 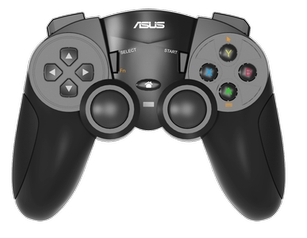 The Asus Game Box is expected to feature an NVIDIA Tegra 4 processor, 2GB of RAM, and 8GB of storage and as of mid-February, it was running Android 4.3 Jelly Bean.

Leaked benchmark results also suggested it could have a 1280 x 720 pixel screen, but since the game controller appears to be a standalone device, it’s more likely that the benchmarks were simply reporting the specs for whatever screen was connected at the time.

The wireless controller has D-pads, arrow buttons, X, Y, B, and A buttons, Start, Select, and shoulder buttons. It supports Bluetooth 3.0 and should run for up to 12 hours at a time with the built-in 430mAh battery.

All we need to know know are when the Game Box will launch, how much it’ll cost, and what the actual box looks like… and what kind of user interface it’ll have. Will this be a stock Android device experience, or a custom experience designed for TV gaming?

OK, I guess there’s still a lot we don’t know yet.