Microsoft is expected to introduce an updated version of Windows 8.1 in March, and a leaked pre-release build gives us an idea of what to expect: An operating system that’s a bit easier to use with a keyboard and mouse.

Starting with Windows 8, Microsoft has offered two different user interfaces with its flagship operating system. There’s a touch-friendly, full-screen Start Screen and support for full-screen “Metro” style apps from the Windows Store. And there’s a traditional desktop view with a taskbar and apps that run in windows.

The Verge took a pre-release version of Windows 8.1 Update 1 and found that it blurs the lines between the two user interfaces a bit. 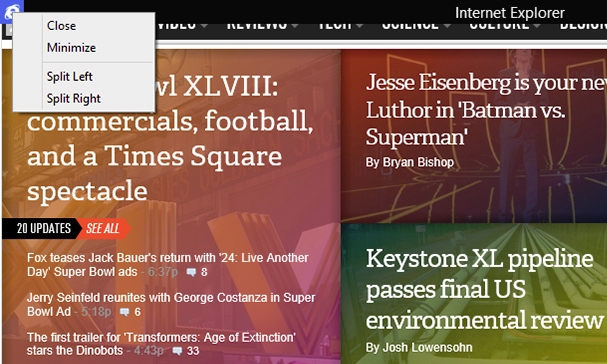 One of the biggest changes is that there’s a new Title bar at the top of Metro apps. You can close, minimize, or snap and resize apps using a mouse by clicking on the title bar.

What you can’t do is run those apps as if they were desktop apps. They’ll still open in the full-screen, Metro-style user interface. But you can see previews of currently running Metro apps from the desktop.

When you’ve got Metro apps downloaded from the Windows Store running you can see an icon in the desktop taskbar. Hover over the icon and you’ll see live previews of those apps just the way you would for any traditional desktop apps when running Windows Vista or later.

It remains to be seen whether that’ll be enough to convince desktop fans to start downloading apps from the Windows Store — but it could help Windows 8.1 feel a bit more like a single OS rather than two operating systems running side-by-side, but keeping Metro and desktop apps separated from one another.

Other changes include a shutdown button on the Start Screen which should save you a bit of time when shutting down or restarting the computer, and a new mouse-friendly right-click menu for tweaking the live tiles on the Start Screen.