Sony is launching its first wearable fitness tracker in March. The Sony SmartBand can monitor every step you take, as well as locations you visit, songs you hear, and more. One thing it can’t do is snap photos to remind you of the places you’ve been.

But Sony may have another device that does just that. CNET reports the company is showing off a prototype of a camera that you could wear like a necklace to shoot and save images without any user intervention. 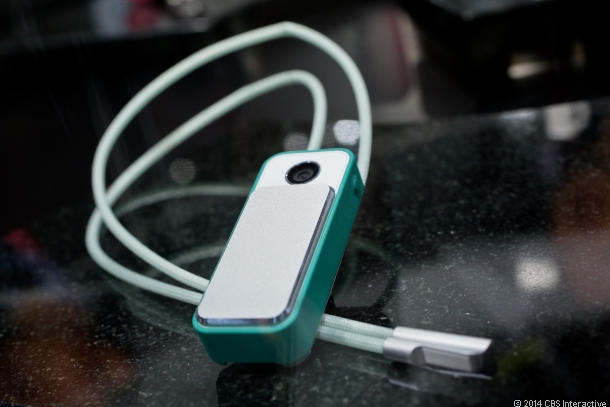 Sony hasn’t committed to bringing the camera to market. But if it does, odds are you’d be able to pair it with the same Sony Lifelog app on your phone that you would use to keep track of Sony SmartBand data.

In other words, you’d have an app that could automatically record your movements and location and help you manage images recorded from each location you visited. No need to pull out your phone to remember the people or landmarks you saw when they’re recorded without your ever pressing a button.

Sony isn’t the first company to consider a life-logging camera though. The Narrative Clip launched last year, offering a $279 device that you can clip to your shirt to shoot photos every 30 seconds and upload them to the cloud where you can peruse your photos.

The idea isn’t necessarily to replace a good DSLR camera — no matter how good these wearable, automatic cameras get they won’t let you frame the perfect shot. But they can act as memory aids for people who don’t habitually take their phones out of their pockets to record everything — and for folks who do, they can relieve you of the urge to look at the world through a screen instead of just existing in the moment while your camera works away without you.

Unfortunately there’s a major down-side to this sort of automatic camera. Most of the shots it records will be of mundane things like your computer screen or TV… and when you are actually doing interesting things or meeting interesting people, you’re as likely to get a photo of their shoulder as of their face.