The Nokia X family of smartphones run a heavily modified version of Android. They have a tiled home screen that looks more like Windows Phone than Android. They rely on Nokia Here Maps instead of Google Maps and use the Nokia Store rather than the Google Play Store.

But under the hood they’re running Android… and so it hasn’t taken long for hackers to figure out how to get some of Nokia’s apps to run on other Android phones and tablets. 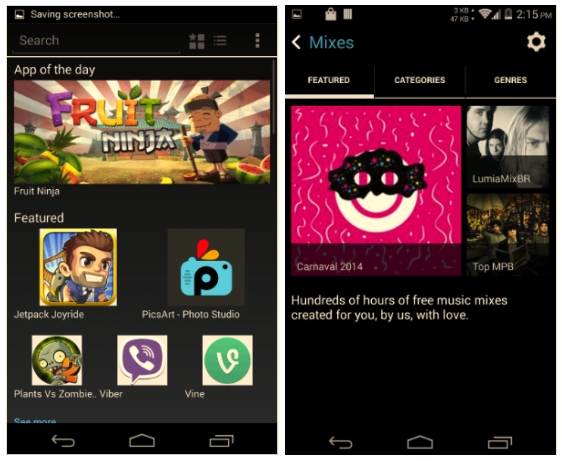 Xda-developers forum member opssemnik has  kicked things off by porting the Nokia Store to run on other Android devices. He’s also posted instructions for getting Nokia’s Mix Radio streaming music app to work on Android phones or tablets.

Mix Radio is a Pandora-like service that creates custom radio stations for you when you enter the names a few artists. While the basic service is free, you can also pay a $4 per month subscription fee if you want to be able to skip an unlimited number of songs.

In order to use Mix Radio on an Android device other than a Nokia X handset you’ll need to modify your phone’s build.prop file so that the app thinks you’re using a Nokia X.

But the Nokia Store doesn’t require any modifications at all. Unfortunately not every app available from the Nokia Store unless you’re actually using a Nokia X. But if you’re installing the store on an existing device, odds are you already have the Google Play Store or another app marketplace.

While Nokia’s Android-based handsets are low-cost phones aimed at budget smartphone shoppers, some of the software Nokia offers on those devices is pretty nice. It’ll be interesting to see how many more Nokia apps get ported to run on other Android phones… and whether Nokia takes any steps to prevent its apps from working on non-Nokia devices.

6 replies on “Nokia X apps ported to other Android devices”