Netflix holds an annual Hack Day where its engineers are encouraged to come up with new ideas for the online video streaming service. While it’s not clear whether any of the hacks will make it into real products that you and I can use, some of the things the teams came up with at the most recent event are pretty cool. 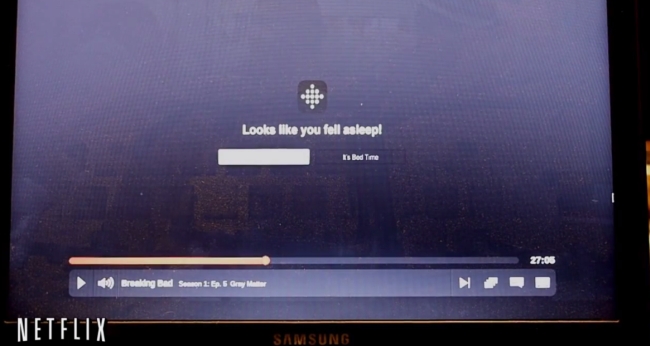 For instance, there’s a hack that uses a Fitbit’s sleep tracking software to determine if you’ve fallen asleep while watching a video — and it’ll automatically pause the video and add a bookmark so you can pick up watching where you left off next time you fire up Netflix.

Another hack include a tool that lets you bump two iOs devices together to start playing a video.

The idea is that you can select a video on your phone and it’ll play on their tablet as long as you both have Netflix installed. There’s no need to share your user credentials.

This hack is iOS-only for now, since it uses Apple’s iBeacon technology for Bluetooth.

While the Netflix Beam and Sleep Tracker hacks depend on specific hardware, other hacks were software-only, and seem like the sorts of things that could easily show up in future updates to the Netflix service.

For instance, on team showed how PIN-protected user profile could work, letting you set up a profile for your kids, for instance, and another for grown ups in your family. That way kids could watch age-appropriate videos without accidentally stumbling upon your queue filled with gory horror movies and action flicks.

Another hack involves custom playlists, letting you set up a list of videos to watch one after the other. You could create a holiday playlists, for instance or one for kids. Instead of just viewing a bunch of episodes of one TV show, you could add multiple shows or movies to a single list and skip from one video to the next, or back again.