There’s no shortage of boxes you can use to bring internet video to your television. But the makers of the popular Mohu leaf antenna want to launch a new box that doesn’t just let you watch Netflix and Hulu Plus on your TV, it also makes it easy to watch free, over-the-air broadcasts using the same box.

Mohu Channels is a small, Android-powered box that you can hook up to your TV (and an external antenna) to create a custom program guide for broadcast TV and internet video. 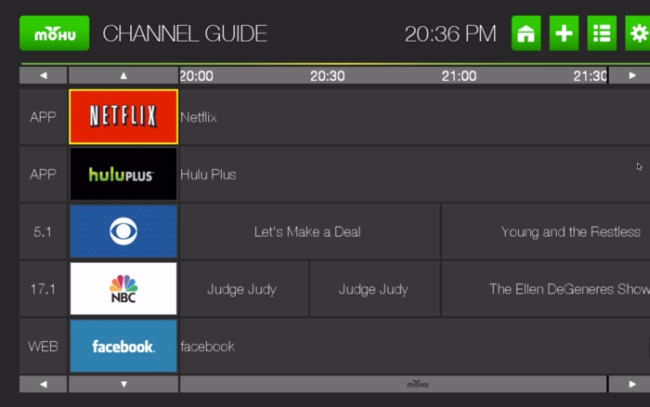 Mohu plans to launch the product in June, and the company is running a Kickstarter campaign to get things started. The first 200 backers can reserve a Mohu Channels device for $79. After that the price goes up to $89.

Under the hood, Mohu Channels is a lot like other Android TV boxes. It has a 1.5 GHz ARM Cortex-A9 dual-core processor, WiFi, Ethernet, HDMI, and USB and comes with a wireless remote control. 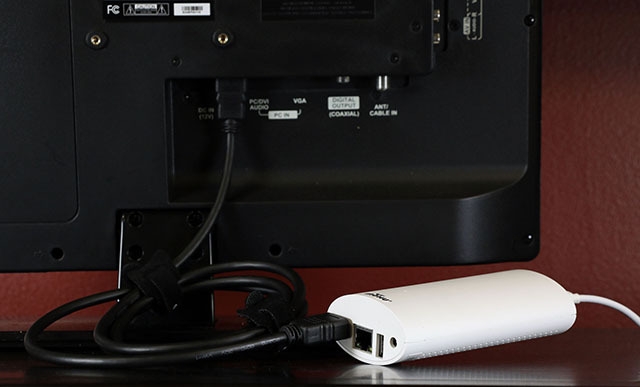 But there are a few things that set Mohu Channels apart. The first is the channel guide-based user interface. You can see what shows are currently airing on broadcast TV — and you can add or remove channels so you’ll only see the local stations or networks you care about.

You can add online video sites or any website to the same channel guide, so you can flip from NBC to Netflix to Facebook using the universal channel guide. There’s no need to flip inputs on your television or exit the channel guide to navigate an Android app launcher.

The device does feature Google Play Store access, so you can install most Android apps. Unfortunately that means while YouTube, Netflix, Hulu Plus, Crackle, and Google Play Movies should be available, Amazon Instant Video will likely not be available anytime soon — it’s currently only available for Google TV, Amazon Kindle Fire, or iOS devices.

Another thing that helps distinguish Mohu Channels is the wireless remote. It features a QWERTY keyboard for entering web addresses and other text, but you can also use dedicated power, guide, volume, and channel buttons.

The remote connects to your Mohu Channels via RF, so you can tuck the box behind your TV and use the remote without a direct line of sight. But it also works as a universal IR remote, so you can use it to turn your TV on or off. The remote also supports air mouse functions so you can wave around an on-screen cursor to navigate websites and web apps that may not really be designed for traditional remotes.

While this isn’t the first Android TV box I’ve seen to feature support for broadcast TV, it’s one of the first to specifically support ATSC over-the-air broadcasts in the United States. It also comes from a company that’s got a pretty good reputation for offering high quality hardware for watching OTA HDTV.

If Mohu Channels had built-in DVR capabilities rather than just a program guide, I’d be seriously tempted to ditch my Windows home theater PC for this little box. But it doesn’t… so I probably won’t.