Samsung isn’t the only company that thinks there’s a middle ground between quad-core and octa-core chips. Chip maker MediaTek is apparently working on its own hexa-core processor.

According to a leaked product roadmap, the upcoming MT6591 is a 6-core processor with support for HSPA+ wireless networks and 1080p HD video playback. 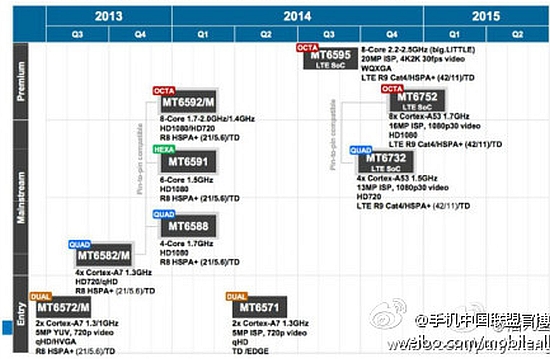 The new hexa-core chip has a clock speed of 1.5 GHz and it’s apparently part of MediaTek’s “mainstream” product family rather than the company’s entry-level or premium product lines.

Other upcoming (and unannounced) chips in the roadmap include a 1.7 GHz octa-core, ARM Cortex-A53 64-bit processor called the MediaTek MT6572 which is due out toward the end of 2014, and the MT6571 1.3 GHz ARM Cortex-A7 dual-core chip for entry-level devices due out in the next few months.

4 replies on “MediaTek working on a 6-core CPU”