Google Now is making the jump from phones and tablets to laptops and desktops. Google’s smart notification system now works with Chrome beta. That means you can get notifications in a web browser when you’re using Chrome OS, Windows, or OS X. 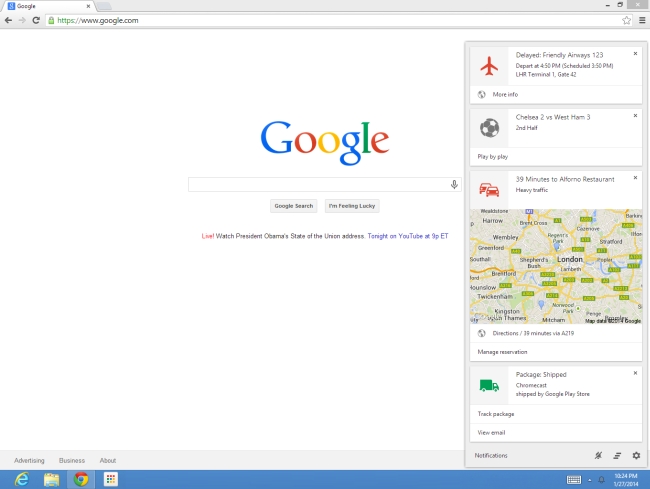 What makes Google Now different from most notification services is that it won’t just let you know when you’ve got an upcoming appointment or incoming chat message. It’ll tell you answers to questions you haven’t asked yet.

For instance if Google knows you’ve got an upcoming flight (thanks to a confirmation emailed to your account), it can let you know on your travel day whether the flight is on time or delayed. Likewise if you receive a shipping notification via Gmail, Google Now can show tracking notifications.

It can also show weather forecasts for your current location or places you regularly visit, sports scores for teams you often search for, and traffic reports for for your normal commute, among other things.

On the one hand, Google Now can be a creepy reminder of just how much information Google automatically collects about you. On the other hand, it’s also evidence that Google knows how to mine that data in ways that can actually be quite useful to you.

Users can try out Google Now in Chrome by downloading the latest version of Chrome beta and tapping the bell or numbered icon to bring up the Chrome notification center.

Google Now is often confused with Google Voice Search, because Google made the mistake of demonstrating them at the same time when Now was first introduced. As such, a lot of people think it’s sort of a Siri clone. And if you’re using Android, Voice Search and Now do work together to let you do things like set reminders using voice commands. Now you can see notifications for those alarms on a desktop or laptop by signing into their Google account in Chrome.

Maybe you’ll be able to set appointments in a browser soon too – -There’s already some support for Google Voice Search in Chrome and Google lets you launch some web apps using voice commands.