ARM doesn’t make its own chips, but instead licenses its technology to hardware makers who produce their own processors based on the designs. Chip makers MediaTek and Realtek are among the first to start working on Cortex-A17 designs. 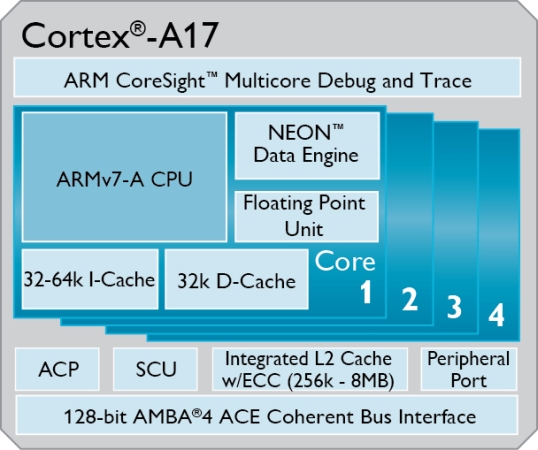 ARM says the Cortex-A17 processor will offer about 60 percent more performance than an ARM Cortex-A9 chip such as a Rockchip RK3188, NVIDIA Tegra 3, or Samsung Exynos 4412 processor.

In other words, next year’s mid-range phones and tablets could be significantly more powerful than last year’s top-tier devices.

In this case, it looks like ARM expects device makers to offer big.LITTLE chips that pair ARM Cortex-A17 CPU cores with Cortex-A7 cores for anywhere from quad-core to octa-core chips.

It’s not clear from ARM’s press release how the Cortex-A17 will compare with the company’s existing designs, but AnandTech reports the chip seems to be an updated version of the mid-range Cortex-A12 rather than a replacement for the high-end Cortex-A15.

Meanwhile the company’s upcoming Cortex-A50 series chips will be the first based on ARMv8 architecture and 64-bit technology. The first of those chips are expected to launch this year, with more powerful models coming in 2015.