Samsung sells some of the most popular Android phones and tablets on the market… but if you don’t feel like spending your money on both a Samsung Galaxy phone and tablet, there may be another option.

Chinese company Shenzhen Migoal has developed a tablet dock called the TransMaker for Samsung Galaxy S3 and S4 phones. The dock doesn’t do much on its own, but slide your phone into the back and you can run your Android apps on a larger touchscreen display. The tablet also has its own battery which you can use to recharge your phone. Migoal also plans to offer dockable keyboard options.

Migoal started showing off the TransMaker concept in August, 2013. Now the company has launched a crowdfunding campaign in hopes of bringing the device (and additional accessories) to market. Update: The Indiegogo campaign seems to have gone missing.

The team’s hoping to Backers of the campaign can reserve hardware at discounts. A 10.1 inch tablet dock is just $99 for early bird backers, for instance.

One thing to note is that this is a flexible funding campaign. That means even if Migoal doesn’t reach its goal, the company gets to keep all the cash… with no guarantee that the product will actually make it to market. So proceed with caution.

Also make sure to read the entire Indigogo page before pledging — there are some interesting caveats, such as the fact that automatic screen rotation is disabled when your phone is docked, and the home screen will always show up in vertical mode with big black bars on the sides.

Since this is a third-party accessory it’ll probably never work quite as well as an Asus Padfone (where the phone and tablet dock are made by the same company). But with prices starting at $99, a TransMaker is a lot cheaper than a Padfone.

It’s also kind of a neat option if you don’t want to have to sync data between your phone and tablet, since all the data is on your phone when you use this type of dock. The larger display and keyboard are just accessories. 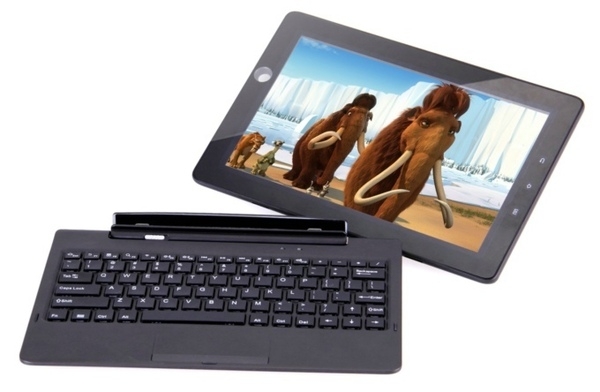 Both models will work with optional keyboard docks, which means you can insert your phone into your tablet dock then slide that into the keyboard to run Android apps on a notebook-style contraption with extraordinarily long battery life. The keyboards have batteries with up to 10,000mAh.

There’s also an optional Bluetooth dialer which looks like a small cellphone. You can use it to make or receive phone calls even when your phone is docked — so you don’t have to remove the phone from the tablet to talk.

If all goes according to plan, the first TransMaker devices could ship in March, 2014.