The most striking thing about the Nokia Lumia 1520 is its big 6 inch, full HD display which makes it one of the largest handsets to ship with Microsoft’s Windows Phone software. But like other high-end Nokia devices, it also has pretty powerful specs and a high quality camera.

Now there are reports that Nokia is going to take some of those features and squeeze them into a smaller package. The new phone would be called the Nokia Lumia V. 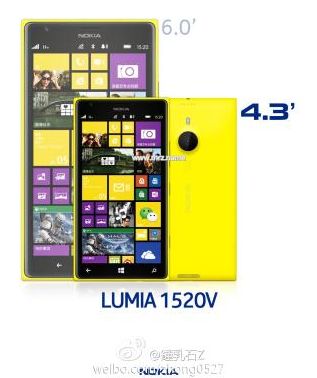 It’d have a 14MP Nokia PureView camera. While that’s not quite as impressive as the 41MP camera that comes with the Lumia 1020, Nokia’s cameras tend to snap high quality photos with better color saturation than you get from many smartphone cameras.

via Phone Arena and WMPowerUser