Gaming hardware company Razer has unveiled a new concept for a modular PC which makes upgrades as easy as sliding a block out of the PC frame and replacing it with a new module. You could theoretically upgrade the CPU, add a graphics card, throw in some extra storage, or change just about anything on a PC in a matter of minutes or even seconds.

Razer calls the concept Project Christine, and while it’s not ready to ship yet, the company wants to get the idea out there and see what potential customers think before deciding whether to bring a product to market. Razer did something similar with Project Fiona a few years ago, which turned into the Razer Edge PC gaming tablet in 2013. 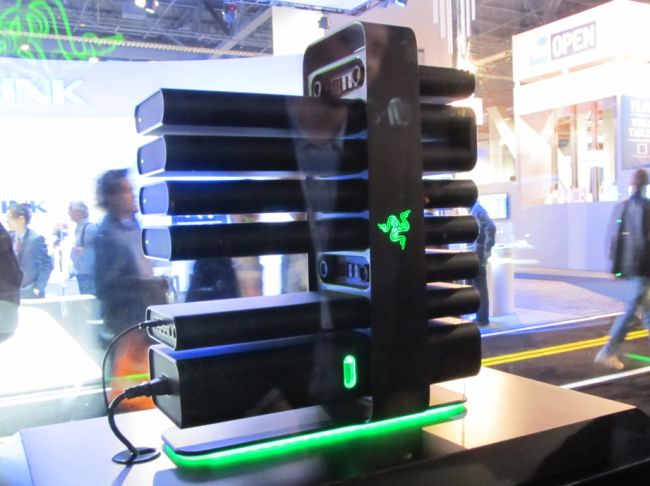 While there’s nothing particularly “little” about Project Chrstine, it caught my eye because of the out-of-the-box thinking that went into its design. I also love the idea of a modular PC that’s simpler to upgrade than existing desktop solutions.

You don’t have to open the case, remove a CPU fan or heatsink, and go through all the other steps you’d normally have to complete to upgrade the hardware on this type of machine. Just buy a new module, pop out the old one and insert the new. The connectors can handle input and output and provide power.

This is also an entirely fanless system thanks to liquid cooling. The Project Christine computer has a cooling module which cranks liquid through every module. When you remove a module, the vents automatically close so nothing will leak when you swap out components, but when the system is in use the coolant will keep all your components from overheating.

If enough people like the idea, we could see something like Project Christine as a real product in the next year or two, but don’t expect it to be cheap. Its appeal is its power and simplicity, not its price. The Razer Edge gaming tablet is one of the pricier Windows tablets around, but it’s aimed at gamers willing to pay a premium price for performance. Project Christine will likely follow suit.

The company might open up the platform to third party vendors though, which could bring down the price of modules. If you can buy a graphics module from competitors like Saphire or Zotac as well as Razer, you might have a better chance of finding one that meets your needs (and budget).