Intel currently offers a handful of Bay Trail chips aimed at tablets, including the Atom Z3770, Z3740, and Z3740D. These chips are used in tablets including the Asus Transformer Book T100, Dell Venue 8 Pro, Acer Iconia W4, and others.

Soon Intel could have a few new low-power Atom chips aimed at tablets with 8 to 13 inch displays. 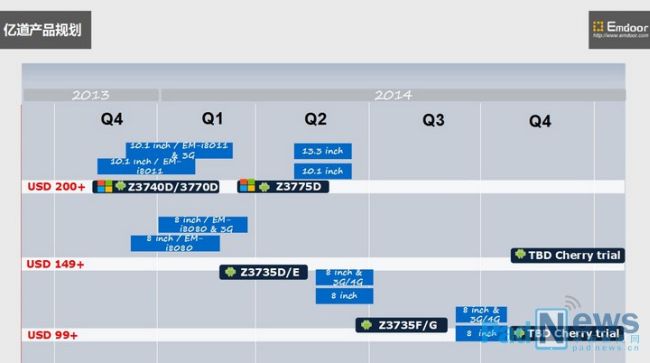 PadNews reports that a product roadmap from equipment maker Emdoors spills the beans on a few upcoming Intel chips including an Intel Atom Z3775 processor family aimed at 10 inch and larger models with prices starting at $200 and an Atom Z3735 aimed at 8 inch tablets priced $100 and up.

Intel’s Bay Trail chips offer low power consumption that comes close to rivaling ARM-based processors and we’ve seen Intel powered tablets that can get 8 or more hours of battery life. But these are x86 chips which are capable of running full Windows 8.1 software, which means you really could use a cheap Bay Trail tablet as a notebook or even desktop replacement.

Intel’s expected to launch its next-generation Atom “Cherry Trail” processors toward the end of 2014. Until then, it looks like the company plans to flesh out its Bay Trail lineup with new models aimed at a variety of price points.