One of the key differences between Android, iOS, and other mobile operating systems and their desktop or notebook counterparts is support for multi-window modes. On a desktop PC you can open as many windows as you’d like and arrange them side-by-side or in other configurations. On a phone or tablet, you’re usually stuck looking at one app at a time.

The developers of OmniROM wanted to do something similar — but they weren’t happy with any of the existing solutions. Instead developer xplodedwild looked to an older mobile operating system for inspiration: webOS. 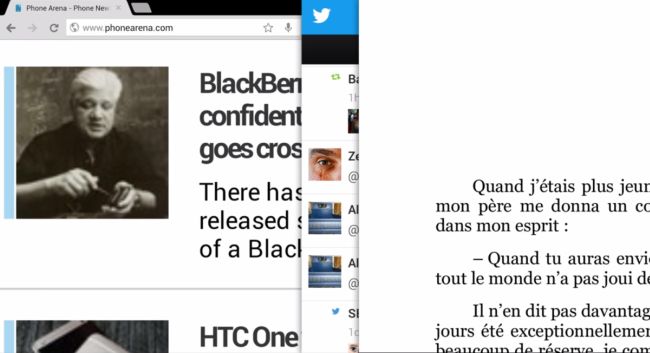 Palm’s webOS software for phones and tablets used “stacks” as part of its multi-tasking system. When users opened multiple, related apps, they’d appear on screen as if they were a few playing cards or pieces of paper stacked one on top of the other. The app on top was the one that was currently in use, but the edges of other apps were visible underneath. To flip between apps, just pull out the one you want to use and place it on top of the stack.

Future versions of OminROM could borrow this idea. Here’s how it would work: You’d be able to divide your phone or tablet screen into two sides and have two apps running side-by-side. But the window on the right would also have a stack view, allowing you to add as many apps ad you’d like.

Only two apps will actually run at a time. Anything buried in the stack will be paused. But this lets you open a web browser or chat app, for instance, in the left window and have a series of additional apps that you can flip through on the right.

For now the new system is still just a concept. The team hasn’t actually added it to OmniROM yet. But future versions of OmniROM could add support for this type of multi-window, multi-tasking to the custom version of Android.

Since Android apps are generally designed to change their size and shape depending on the size of you screen, most apps should be able to run in the new system without any modifications. And xplodedwild says the goal is to create the new system in such a way that it will be easy to update when Google releases future versions of Android so that OmniROM will be able to move to Android 4.5 and beyond quickly.