Nokia’s current flagship smartphones may run Windows Phone software, and Microsoft may be in the process of acquiring the Finnish phone company. But it looks like Nokia is working on its first Android phone. Whether it’ll actually come to market anytime soon remains to be seen.

Rumors of an Android phone code-named “Normandy” have been flying for the past few months, and now leaked photos and benchmark results give us an idea of what to expect.

The Nokia Normandy appears to be a budget Android smartphone with a custom user interface, and it could be Nokia’s follow-up to its Asha line of phones which also don’t run Windows Phone software. 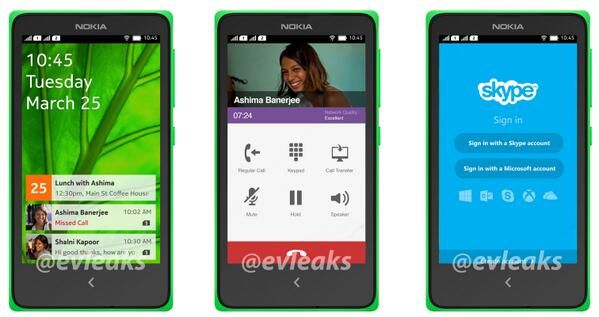 The move would make sense if Nokia is looking for a way to offer lower-cost handsets while tapping into the Android ecosystem to allow users to access hundreds of thousands of third party apps. On the other hand, The Verge reports that the phone might use a forked version of Android which means Google might not allow Nokia to include the Google Play Store on the device.

It’s possible that Microsoft’s acquisition of Nokia could mean the Normandy project will remain nothing more than a footnote in smartphone history (rather than a real product that you can buy). After all, Microsoft has been tweaking the latest versions of Windows Phone to ensure that they can run well on low-end devices, which might eliminate the need for a secondary software platform for budget phones altogether.

Anyway here are a few of the latest leaks about the phone which may or may not ever launch.

Specs leaked through the Antutu benchmark app suggest the phone will have an 854 x 480 pixel display, a 5MP camera, and run Android 4.4 KitKat software. There’s no official word on the CPU or screen size, but the phone’s rumored to have a 4 inch screen and Qualcomm Snapdrgon chip.

Meanwhile, @evleaks has obtained some screenshots showing what the user interface could look like. While the phone appears to be running Android, it’s a modified version of the operating system with a custom home screen, phone dialer, and other tweaks.