Sony’s Vaio Fit 11A is notebook with an 11.6 inch display that you can flip over so that it’s flat against the keyboard, allowing you to use the computer as a tablet. Sony has offered larger Fit models since 2013, but the company’s getting ready to launch its first 11.6 inch model in February with a starting price of $799.

After spending a few minutes with a demo model, I have to say I really like the design. 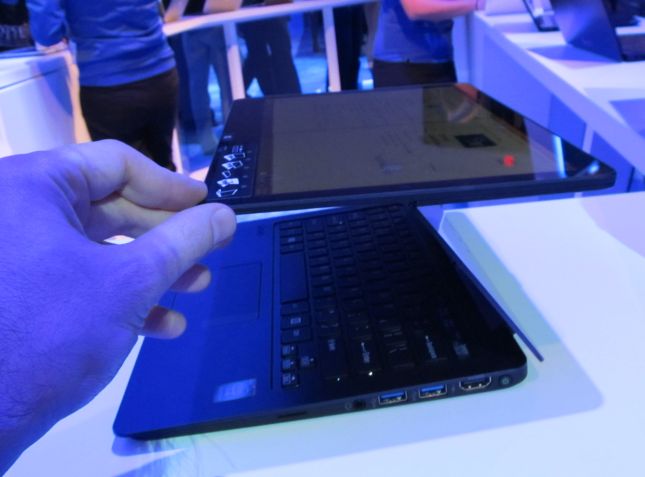 I was worried that at 2.8 pounds the Fit 11A would be too heavy to use as a tablet… and it is kind of heavy compared to an iPad or Samsung tablet. But the weight is well distributed and the computer is thin enough to easily grip in one hand. I wouldn’t want to do that for very long, but I could easily imaging sitting on the couch playing a game, reading a book, or surfing the web with this tablet.

Flip the screen back over to laptop mode, and you’ve basically got all the functionality of a Windows notebook, including a full-sized keyboard and touchpad.

The machine I saw has an Intel Pentium N3520 Bay Trail processor with a TDP of 7.5 watts, a 1920 x 1080 pixel display, 4GB of RAM, and a solid state drive. It also features an N-Trig digitizer, although I didn’t have an opportunity to test pen performance.

Sony also plans to offer models with Haswell chips and support for up to an Intel Core i5 processor. Those’ll probably cost a lot more than $799 though.

The machinism for flipping the screen is pretty nifty. Basically you push back the top of the lid and it flips over a divider in the bottom of half of the lid until it’s facing away from the keyboard instead of toward it. Then you close the lid and you have a tablet.

The battery on the unit I was testing died before I could shoot my demo video, but you can get a look at the Flip 11a’s design and flipping mechanism in the video below.

Sony plans to launch the 2-in-1 tablet in late February.

Update: I found another demo unit, this time with Sony’s digital pen. The pen feels pretty good, pressure-sensitivity seems to work, and my only complaint would be that there’s no dedicated place to store the pen when it’s not in use.