The Asus VivoTab Note 8 is a Windows 8.1 tablet with an 8 inch screen, an Intel Atom Bay Trail processor, and a Wacom digital pen.

With a starting price of about $299, it’s about the same price as similarly sized tablets from Dell, Lenovo, Acer and Toshiba — but this is the first model in its class to have a Wacom digitizer and pen. 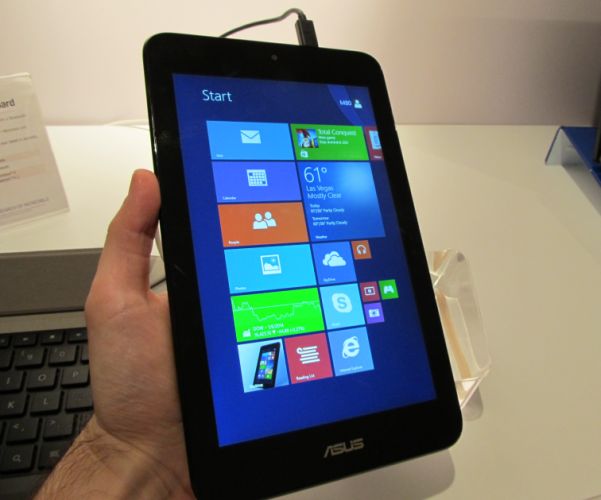 During the brief time I spent with the tablet, that pen seems to be much more responsive than the one you get with the Dell Venue 8 Pro tablet. It’s also easier to store — there’s a slot in the tablet where you can slide the stylus when it’s not in use, something you don’t get with the Venue 8 Pro.

On the other hand, the Dell’s pen is a bit more… pen-like. It’s thicker and feels better in your hand than the Asus stylus which feels like a small piece of plastic… which is pretty much what it is.

The most important thing, though, is that the Wacom digitizer supports over 1000 levels of pressure sensitivity and enables support for actions that would otherwise be difficult on a tablet such as hovering a cursor over on-screen elements. That doesn’t matter much when you’re running tablet-specific apps, but when you want to interact with classic Windows apps that were designed for a mouse and keyboard, hovering can be a lifesaver.

Other specs include a 1280 x 800 pixel IPS display, an Atom Z3740 quad-core processor, 2GB of RAM, and 32GB to 64GB of storage. There’s a 15.5Whr battery, front and rear cameras, and a a micro USB port and microSD card slot. There are stereo speakers on the back of the tablet.

What the VivoTab Note 8 tablet doesn’t have is HDMI output, but that’s not too surprising since it’s a feature missing from most small Windows tablets.

The tablet weighs a little over 13 ounces and feels just about as light as my Google Nexus 7. Since it has the same processor as the Asus Transformer Book T100 it’s likely it should have similar performance… albeit in a smaller package and one which doesn’t come with a keyboard dock.

Asus says the VivoTab Note 8 should be available around late March with the 32GB model selling for $299 and a 64GB model going for $349.