The Asus Transformer Book Duet is a tablet… and a laptop… that runs Windows… and Android. You can switch from Windows to Android or back again with the tap of a button, and you can switch from a tablet to notebook by clicking the tablet into a keyboard docking station.

With a 13 inch screen, the Duet feels a bit large for a tablet, but it works pretty nicely as a laptop.

The Transformer Book Duet TD300 is expected to launch this spring for $599 and up. 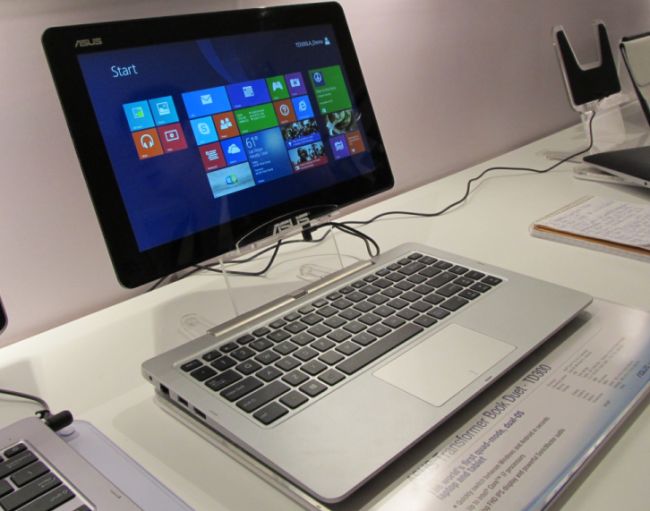 Asus will also offer higher-priced models with 1920 x 1080 pixel displays and additional storage in both the tablet section and the keyboard dock.

Each model has 4GB of RAM, a 38Whr battery, and weighs about 4.2 pounds when you use the tablet and dock together.

One thing Asus doesn’t plan to offer is a keyboard dock with a built-in battery. So while some 2-in-1 laptop/tablet hybrids give you extended battery life when you connect to a keyboard dock, the Transformer Book Duet actually gets better battery life if you use only the tablet portion. Asus says you should get about 5 hours of run time in notebook mode and 7 hours in tablet mode, since the tablet doesn’t have to power the keyboard and hard drive.

What makes the Duet stand out from a sea of 2-in-1 systems is its dual boot features, and in my brief time with the system, it did seem to be able to handle both operating systems pretty well. There’s a quick switch app shortcut that shows up in both Windows 8 and Android and when you tap it, the operating system will switch.

Both Windows and Android run at the same time, so you don’t have to wait for the system to reboot and you won’t lose any data when you switch from one OS to the other.

There’s also a dedicated Android/Windows key on the keyboard which lets you make the switch in notebook mode without reaching up to touch the display.

While Microsoft continues trying to get app developers to write tablet apps for Windows 8, the Duet and other dual OS devices represent an interesting option for consumers. You get a device that can work as a notebook or tablet and you don’t have to miss out on a great selection of apps. There are more than a million apps in the Google Play Store which are now accessible.

But it’d be nice to see a model that weighs a little less and which gets better battery life.