For as long as Android has been around the operating system has relied on the Dalvik virtual machine as the platform apps run on. Now it looks like Google is getting to replace Dalvik with a new runtime called ART.

While Dalvik uses “just-in-time” processing to compile code on the fly, ART using an “ahead-of-time” process to compile apps before you first run them, which could lead some apps to run much more quickly.

Google included ART in Android 4.4 KitKat, but it’s disabled by default. But it looks like the next version of Android could use ART as the default runtime with Dalvik taking a backseat. 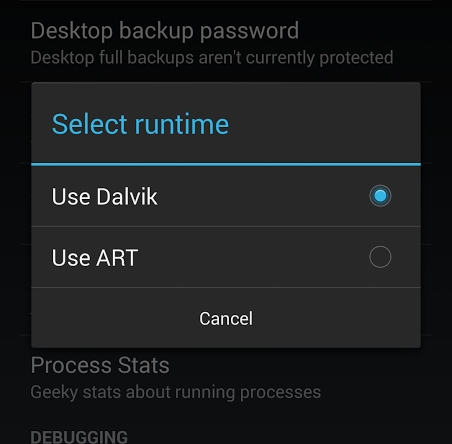 A code commit shows that Google has flipped the switch, making ART the default runtime.

It could still be a while before the change hits your phone or tablet. It’s not clear when Google will release the next version of Android… or how long it will take your device maker or wireless carrier to offer an over-the-air update.

Meanwhile folks with devices running Android 4.4 can continue to enable ART manually through the Developer Options menu. There are still some apps that aren’t optimized for the new runtime, but the list is shrinking as a growing number of developers prepare for the upcoming change.