As expected, chip maker AMD is launching its first processor based on ARM technology. And as expected, it’s aimed at servers rather than smartphones, tablets, set-top-boxes, or the other places you usually find ARM chips.

That said, for a first entry, the AMD Opteron A1100 Series is no joke. It’s one of the first 64-bit chips to be based on ARM’s Cortex-A57 design, and it will be available in quad-core and 8-core versions. AMD expects to ship samples this quarter and launch the chip more widely later this year. 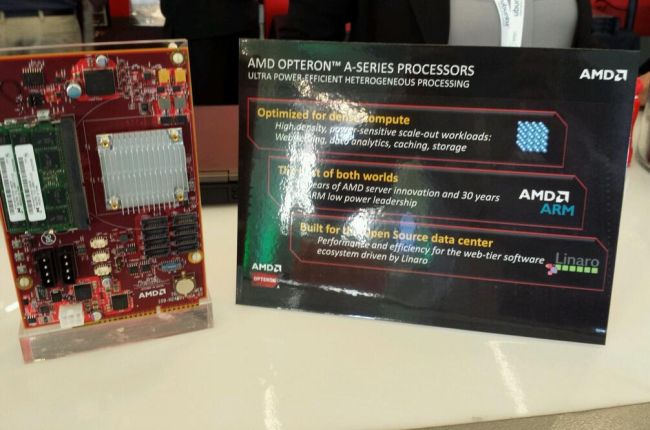 AMD’s development kit is a micro-ATX system with support for up to 128GB of DDR3 memory and support for a Linux environment based on Fedora.

AMD suggests the new chip will outperform some of its existing low-power x86 server chips while offering cost savings over competing Intel solutions.

While the chip maker’s first venture into the ARM processors is aimed squarely at the server space, the company now has the know-how (and licensing agreements) to work on ARM-based chips. Eventually we could see AMD offer ARM processors for consumer devices.

The company has long played second fiddle to Intel in the notebook and desktop chip space, and offering low-power, ARM chips could be a way to compete with Intel’s low-power Atom chips. AMD’s own low-power x86 processors tend to offer decent graphics performance, but lower all-around performance than Intel’s offerings.