Samsung was one of the first major device makers to offer a 7 inch Android tablet. The original Samsung Galaxy Tab launched in 2010 and sold for around $499 or more when you bought one from a wireless carrier. In 2011 a WiFi-only model hit the streets for $350.

The Android tablet market has changed a lot in the last few years, and it’s easy to find a pretty good 7 inch tablet for around $200 or less. So what’s Samsung to do? Go cheaper.

Word on the street is that the company is planning a Samsung Galaxy Tab 3 Lite, which will sell for around 100 Euros. Now SammyToday has uncovered some evidence that the new tablet is real… and has the specs you’d expect from a cheap tablet. 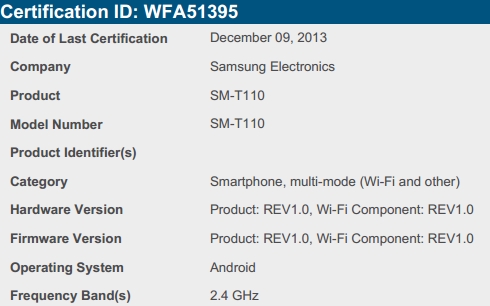 Interestingly, those are pretty close to the specs for the existing Samsung Galaxy Tab 3 7.0 tablet which has 1GB of RAM, 8GB of storage, a microSD card slot, and a $170 price tag. It’ll be interesting to see what corners Samsung cuts in order to lower the price.