Google’s running a sale that kind of makes a Chromecast pay for itself. Through the holiday season, folks who buy a Google Nexus 7 tablet for $229 or more and a Google Chromecast for $35 will get $35 to spend in the Google Play Store.

If you were planning on buying a few movies, TV shows, or music albums to watch or listen to on the Chromecast anyway, that kind of makes it feel like the hardware is free.

If you weren’t, the hardware still costs $35 — but at least you’ve got $35 to spend on apps, games, books, magazines, or other digital content Google offers. 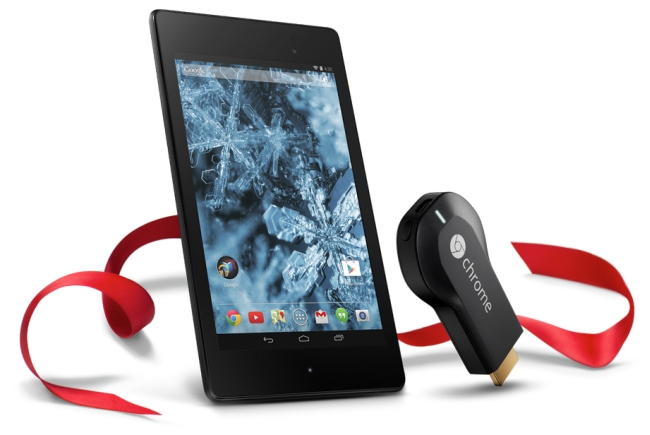 The Nexus 7 is a 7 inch tablet with a 1920 x 1200 pixel display, a Qualcomm Snapdragon S4 Pro quad-core CPU, WiFi, Bluetooth, NFC, 2GB of RAM, 16GB to 32GB of storage, and a 3950mAh battery. It has front and rear cameras, a scratch-resistant display, and support for wireless charging.

Google’s Chromecast, meanwhile, is a tiny device that you can plug into the HDMI port of your TV to stream internet video, audio, and other content while using your tablet, phone, or PC as a remote control. When the Chromecast launched earlier this year it only supported a few services including Netflix, YouTube, and Google Play Movies, but Google keeps adding partners and you can now use it with HBO Go, Hulu Plus, VEVO and apps that let you stream your own personal content such as Plex.

One reply on “Sale: Buy a Nexus 7 and Chromecast, get $35 Google Play Credit”