Hardkernel offers a line of small developer boards aimed at programmers, hobbyists, and other folks interested in building and testing hardware and software applications. The company’s ODROID boards are typically small and relatively inexpensive, but now the company has released the cheapest model yet.

The Hardkernel ODROID-U3 sells for $59. It’s about the size of a credit card, but has room for a Samsung Exynos 4412 quad-core processor, 2GB of RAM, 3 USB ports, a micro USB port, micro HDMI port, and microSD card slot. 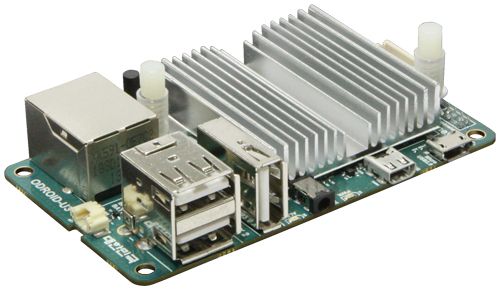 The board officially supports Android 4.x and Xubuntu 13.10 Linux, and Hardkernel offers disk images and source code for each.

The Exynos 4412 processor is the same chip used in last year’s Samsung Galaxy S3. While it’s not exactly state-of-the-art anymore, it’s a reasonably powerful ARM Cortex-A9 processor, especially for a device this cheap. The system also includes 10/100 Ethernet, but no WiFi — you’ll have to provide your own USB dongle if you want to connect to a wireless network.

While you could theoretically use the ODROID-U3 as a tiny, cheap desktop computer, it’s aimed at developers. It comes without a case and features exposed UART and GPIO pins, among other things. There’s also a socket that you can use to connect eMMC storage, but there’s no built-in storage. You’ll need to install an operating system using a microSD card, or purchase one that comes with the software pre-loaded.

The company also offers accessories including I/O boards and shields that give you access to additional input and output pins.