Locket is an Android app that launched this summer with an unusual promise: Install the app and you’d earn money every time you unlocked your phone or tablet. The idea was that Locket would partner with advertisers to display content on your lock screen, and since you were looking at it every time you turned on your phone, you could earn pennies a day and get a payout when you had $10 or more in your account.

Since you could only earn up to 3 pennies an hour, this wasn’t exactly a get-rich-quick scheme. But it was at least an interesting idea… and it’s an idea whose time may have come and gone.

This week Locket announced it’s changing its modus operandi. You can still earn money with the app, but it’s not quite as easy as swiping to unlock your device. 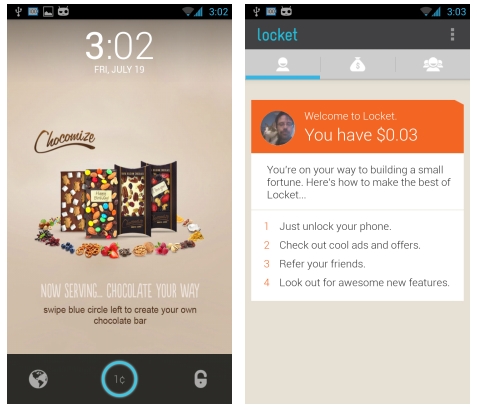 Here’s the new concept: Locket will partner with app developers, advertisers and content providers to put cool photos, news, shopping deals, and other content on your lock screen. You can customize the lock screen with your own album too.

There’s a new “Earn Rewards” section where you can earn money by completing actions at partner sites, but Locket is hardly the only company to offer this sort of system.

Money you may have already earned has been converted to “Locket Points,” and if you don’t have enough money to request a PayPal payment, you may be able to make a donation to charity instead.

Locket says one of the reasons for the move away from pay-per-swipe is because some people were abusing the system. But if you’re looking for another company trying the same thing (and which is willing to send you payment once you’ve earned $1.00), you can check out tTap.

Update: Starting December 13th, tTap will only earn you money if you’re in select cities… starting with Milwaukeee, Wisconsin.