Team Evad3rs have released tools for jailbreaking an iPhone iPod touch, or iPad running iOS 7.0 through iOS 7.0.4. Evasi0n  7 is available for Windows, OS X, or Linux and lets yu jailbreak your device in a matter of minutes.

Jailbreaking an iOS device allows you to access files and settings that would otherwise be inaccessible, and alter the basic behavior of your device. 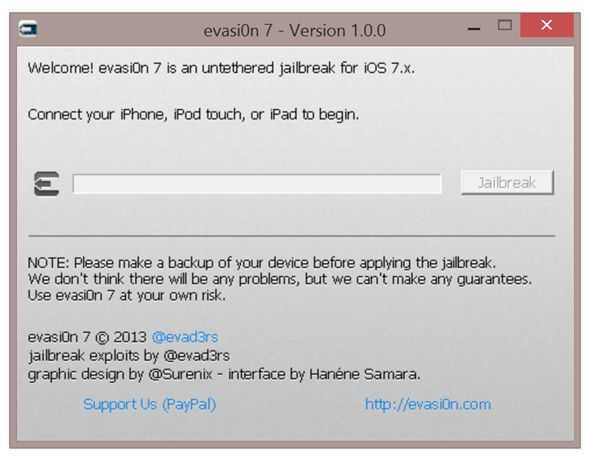 This is an untethered jailbreak, which means once you’ve jailbroken your device, you should be able to reboot it without problems.

The developers recommend backing up your device using iTunes or iCloud so that you won’t lose data if something goes wrong. You’ll also need to disable any lock screen passcodes, and you’ll need to connect your mobile device to a PC running Windows XP or later, OS X 10.6 or later, or Linux.

At launch, the jailbreak will include an unofficial version of the Cydia app store which lets you install apps that require a jailbroken device — it’s possible that some features may not yet be accessible. Cydia developer Jay Freeman says he’s working on adding iOS 7 functions though.

Among other things, jailbreaking an iPhone, iPod touch, or iPad lets you change the system default apps, add third-party keyboards, or tweak the user interface, multitasking behavior, lock screen, or other features.

6 replies on “Jailbreak iOS 7 on an iPhone, iPad, or iPod touch”