If you’re one of the few, the proud, the people who managed to unlock your Chromecast before Google issued a software update that blocks you from doing that, there’s a new custom ROM that gives you far more control over the $35 media streaming device.

Eureka ROM is based on Google’s official Chromecast firmware, but it’s been modified to block updates from Google, accept updates from Eureka’s servers, and let you whitelist websites and web apps. You can also connect to a Chromecast running Eureka ROM via SSH, Telnet, or ADB. 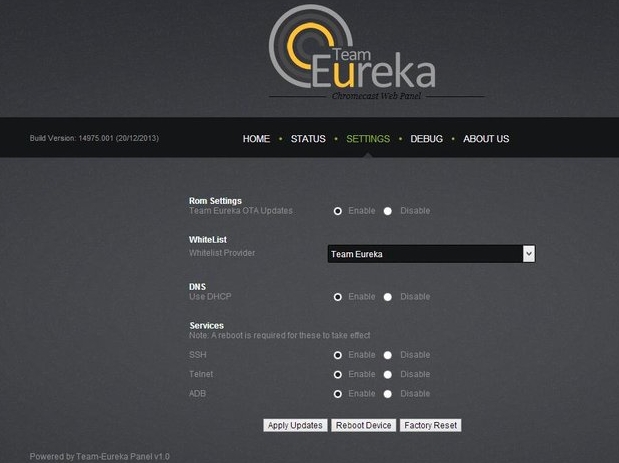 Eureka comes from a team of developers including the makers of PwnedCast, FlashCast, and KyoCast, three of the first tools designed to give hacked Chromecast users more control over their devices.

The new ROM rolls the features of those tools together, but adds new tools including a web panel which makes it easy to add or remove whitelist providers, remote servers, and more.

Setting up Eureka ROM is pretty simple… as long as you’ve got an unlocked Chromecat. Unfortunately, you probably don’t.

Early adopters figured out how to root and unlock the Chromecast shortly after Google started shipping the device — but it didn’t take long for Google to catch on and push an over-the-air security update that blocked the method people were using to unlock their devices.

While it’s relatively easy to gain root access to most Google Nexus phones or tablets or enter developer mode on a Chromecast, it’s not surprising that Google makes root access tough to come by on the Chromecast. This little device is really designed for one thing: streaming content from online media sites like Netflix, Hulu Plus, Google Play Movies, and HBO Go. When you have root access to a device, it’s a bit easier to find ways to circumvent DRM, which makes the companies that own the copyrights on music, movies, TV shows, and other digital content nervous.

All of which is to say, unless you bought your Chromecast at right about the time it came out and rooted it almost immediately, the chances of you having an unlockable model are slim. There is a chance you might buy a new one that’s rootable as long as you unlock it as soon as you turn it on for the first time. But if you wait too long, it’ll download and install the latest secure firmware automatically.