The makers of Ubuntu Linux launched a preview version of the operating system for smartphones and tablets in February, 2013. Users have been installing and testing the software on Android devices with unlocked bootloaders ever since. But up until recently if you wanted to test Ubuntu, you had to replace the Android software on your device.

Now Canonical has released a dual boot developer preview that lets you run Android and Ubuntu on the same device. 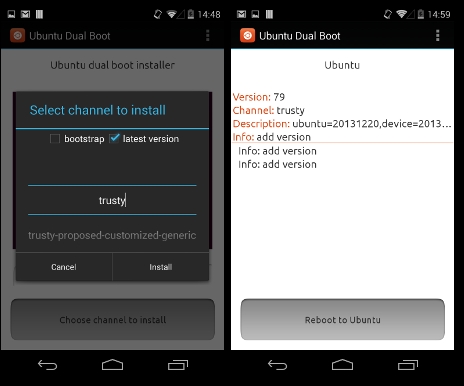 Installing the software is as simple as installing and running an Android app which does the rest of the work for you — but Canonical cautions that the software is aimed at developers, or at least users who are comfortable doing things like flashing custom ROMs and reconfiguring the partition layout on their devices.

If anything goes wrong, you might be on your own, and the installer will rewrite the Android recovery partition on your device.

The installation instructions are also a bit complicated. If you’ve never installed Ubuntu on an Android device, they’re worth reading carefully. If you’re an experienced user and want to throw caution to the wind, you can peruse the installation script for download links for a flashable zip that should install the Ubuntu installer app for Android on your device. If you’re running Android 4.4 KitKat, you may have to install an older radio in order to get phone calls to work in Ubuntu. 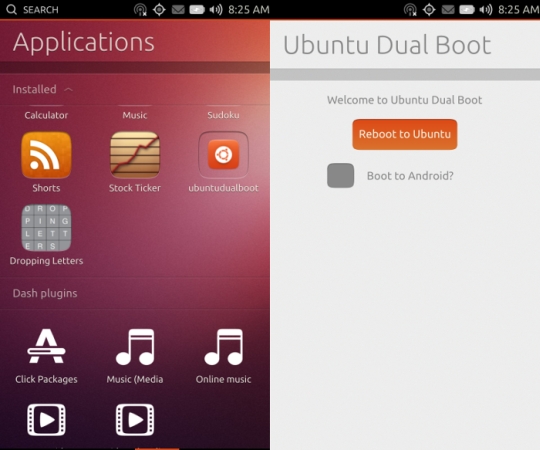 Once the software’s installed, you’ll find an app in both Android and Ubuntu which lets you reboot into the other operating system.

The Ubuntu and Android dual-boot software supports CyanogenMod, AOSP, or stock Android. At launch, the only device that’s officially supported is a Google Nexus 4 smartphone running Android 4.2 or later. Other Nexus devices should also work, but Canonical hasn’t tested them yet. It probably won’t take long for third party developers to port the installer to run on other Android phones and tablets with unlocked bootloaders.

Users will also need at least 2.7GB of free space on their device, ADB tools on a desktop, and a bootloader unlocked device.