While 2-in-1 PCs are all the rage these days, giving you a laptop with a removable tablet section, Asus thinks there’s a market for something a bit different. The Asus Transformer Book Trio is a 3-in-1 PC that can be used in tablet, notebook, or desktop modes.

Asus has been showing off the Trio for months. It’s already been launched in a few countries, but it’s nowhere to be seen at US retail shops. But the computer is slowly inching closer to a US release.

The Trio passed through the FCC in September, and this week Asus filed more documents with the FCC, indicating a slight change in the wireless radios. 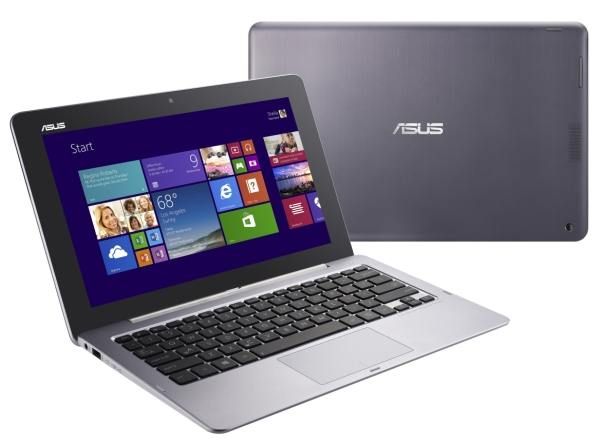 The Transformer Book Trio has 2 parts that you can arrange and use in 3 ways.

There’s a tablet with an Intel Atom Z2560 Clover Trail+ processor, an 11.6 inch, 1920 x 1080 pixel IPS display, 2GB of RAM, and Google Android software. You can use the tablet as a standalone device, or you can attach it to a keyboard dock where it basically becomes the touchscreen display for a Windows laptop.

That’s because the keyboard dock features the guts of a Windows notebook, including up to 8GB of RAM, up to 1TB of storage, a 33 Whr battery, WiFi, Bluetooth, and an Intel Core i5 or Core i7 Haswell CPU.

You can also connect the keyboard dock directly to an external display and use it like a desktop computer without attaching the tablet dock.

The tablet weighs about 1.5 pounds, while the keyboard is about 2.2 pounds. That means when you use them together you have a laptop that weighs about 3.7 pounds, and which reportedly gets around 5 hours of battery life. While that’s not exactly stellar when compared with other Haswell-powered laptops, the Transformer Book Trio might make up for its mediocre battery life with its versatility.