There’s evidence that the next smartphone/tablet hybrid from Asus will be called the Padfone X. The company users the Padfone name to describe smartphones that are designed to work with optional tablet docks, giving you the chance to use the phone’s hardware with a larger display and battery.

Now it looks like a new model called the Padfone X is on the way… although its specs are virtually identical to those of the Infinity. 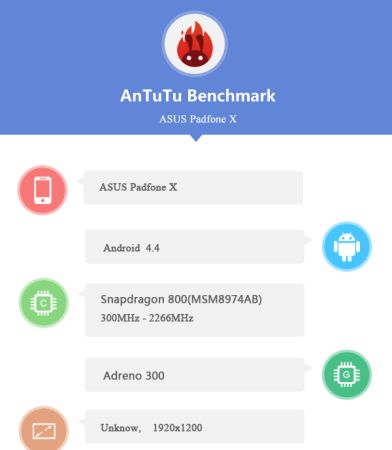 The folks behind benchmarking tool AnTuTu noticed a new device called the Asus Padfone X in their database recently. That suggests someone has been testing a pre-release version of the device.

We don’t know the actual screen size, or even if the hardware is final at this point, but here are the specs that AnTuTu uncovered:

Not surprisingly, the device scores pretty well in benchmarks.

Asus plans to unveil a new line of products at an event in Las Vegas on January 6th, so we may learn more about the Padfone X during the week of the 2014 Consumer Electronics Show.