Modern smartphones let you do much more than make phone calls: You can play games, surf the web, listen to music, watch videos and run thousands of apps that let you do everything from creating artwork to monitoring your fitness.

Some folks would rather have a pocketable device that runs Android than iOS though.

We did a roundup of Android alternatives to the iPod touch a few years ago, and while many of the devices we featured are still available, the specs are starting to look a little dated. So it’s time for an update. 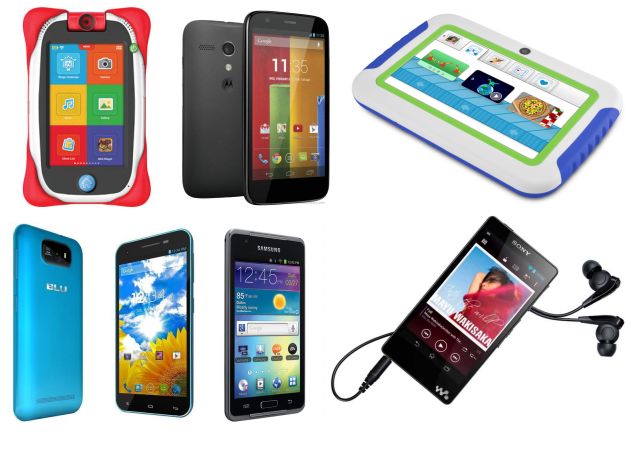 Most Android device makers have spent the past few years focused on phones and tablets rather than portable media players — but that doesn’t mean you can’t find a few good iPod touch alternatives… or sort of make your own by picking up a cheap Android phone and using it without a SIM card.

Update: This article was originally published in late 2013. If you’re still looking for a good Android-powered alternative to an iPod touch, I’d still recommend picking up a cheap Android phone. Some of them are *really* cheap these days.

But you might also be able to find a high-quality mid-range phone if you’re looking for a better screen, processor, and performance.

In fact, let’s start there — the Motorola Moto G is a smartphone. But it’s a reasonably good phone with a reasonably low price tag. You can pick one up for just $179. You never have to pay a dime for a phone contract if you don’t want to.

That means you can pick up a fully functional Android phone for less than the price of a modern iPod touch. 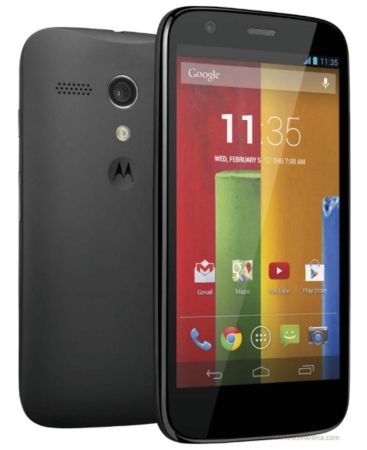 Motorola also offers a line of colorful back covers, letting you customize the look and feel of the phone.

Another nice benefit is that if you decide you do want to use the Moto G as a phone, all you have to do is slide in a SIM card for a compatible wireless network. Some carriers offer significantly lower monthly rates if you bring your own phone.

The Moto G may be one of the best Android phones you can buy without a contract for $200 or less, but it’s hardly the only model.

, featuring Android 4.0 or later, with a range of screen and processor options. 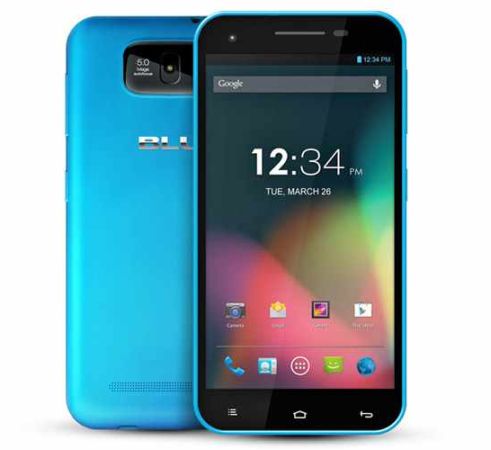 There’s also no shortage of inexpensive Android phones from Chinese companies as sites such as PandaWill, ChinaGrabber, GeekBuying, and AliExpress.

While these phones are of varying quality, and many won’t work with 3G or faster networks in the US, they’re generally pretty cheap and if you don’t care about cellular connectivity, they might make decent portable media players, gaming consoles, or day planners.

And of course, you can always find good deals on older phones at eBay or other sites that sell used and refurbished products — but these days it’s not difficult to find a reasonably good Android phone that sells for $200 or less, unlocked. So you don’t necessarily need to go with an older device to save money.

While major device makers haven’t really done much to offer true alternatives to the iPod touch lately, makers of tablets for kids actually have a few interesting options — and they tend to be dirt cheap.

Ematic offers a line of kid-friendly devices with 4.3 inch displays thick plastic cases, a Kids mode user interface, and a parent mode that lets adults access apps that wouldn’t be available to kids.

The latest model is the FunTab mini 2, and it’s available from Walmart for $50. 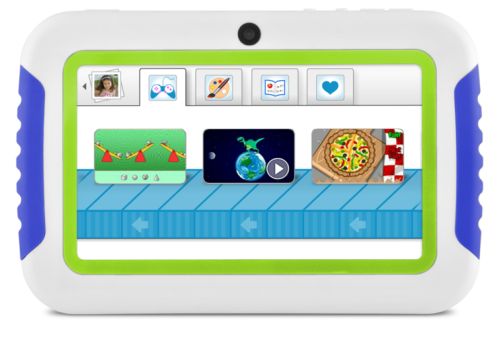 It runs Android 4.0, but features a custom user interface designed for kids. Unlike most adult tablets, you won’t get access to the Google Play Store with the FunTab mini 2, but the little device does come with a number of popular games including Angry Birds, Fruit Ninja, Cut the Rope, and Where’s my Water.

There’s also educational software, and parents can see how much time kids spend with different apps, or use built-in software to read a story that kids can listen to later. Parents can also block access to content selectively.

Ematic says the Funtab mini 2 should get up to 5.5 hours of battery life.

Another kid’s tablet maker has a device that’s a bit bigger, and a bit more powerful than the FunTab mini 2. The Fuju Nabi Jr. features a 5 inch, 800 x 480 pixel display, an NVIDIA Tegra 2 ARM Cortex-A9 dual-core processor, 512MB of RAM, and 4GB of storage.

It’s available from retailers such as B&H for about $100. 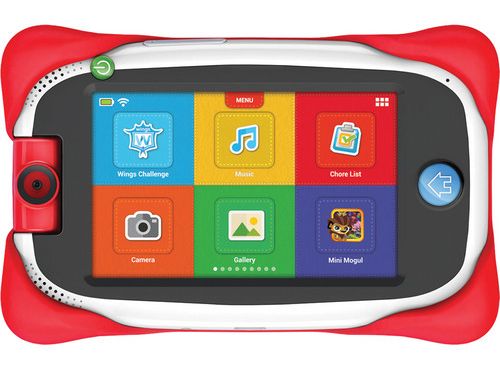 The Nabi Jr. might be a little chunky to fit in your pocket. Not only does it have a thick plastic case to help protect it from the abuse of little hands, but it also has an optional rubbery case.

The device runs Android 4.0 Ice Cream Sandwich, but like most devices aimed at kids it has a custom user interface and doesn’t come with access to the Google Play Store. But it does support side-loading, which means that you can install virtually any app if you can get your hands on an APK installer file.

The Nabi Jr has WiFi, Bluetooth, a 2MP camera that rotates to face the front or back, and a 2350mAh battery. It also features parental control software that lets you monitor or filter the content your kids user.

Sony is one of the few companies offering a true alternative to an iPod touch at the moment. The company’s Walkman F-Series digital media players look a bit like smartphones, but they’re pocket-sized Android devices designed first and foremost for media playback. They don’t make phone calls unless you install Skype or another voice-over-internet app.

Unfortunately the Sony Walkman F-Series has something else in common with the latest iPod touch models: They don’t come cheap.

The most recent Sony Walkman F880/F886 series devices aren’t yet officially available in the US, but you can pick one up from eBay for between $350 and $400. 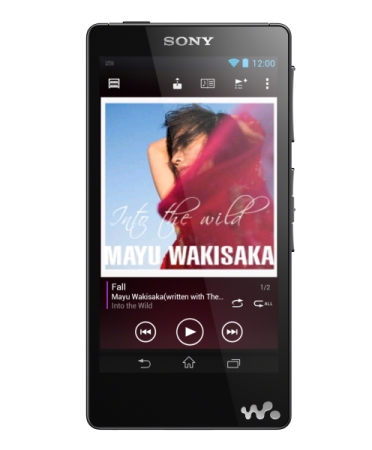 While most of the specs don’t sound all that impressive — there isn’t even a camera — the Walkman F886 stands apart from the competition primarily through its support for high-quality audio.

If you’re looking for something a bit cheaper, you can save a few bucks by picking up an older, discontinued Sony Walkman. Previous-generation devices with NVIDIA Tegra 2 processors and Android 2.3 software, for instance, sell for about $248 — but at that point you’d probably be better off picking up a Moto G or a different phone.

Those numbers tell you about the screen sizes for these devices, which typically feature Android 2.3 software, front and rear cameras, and microSD card slots. 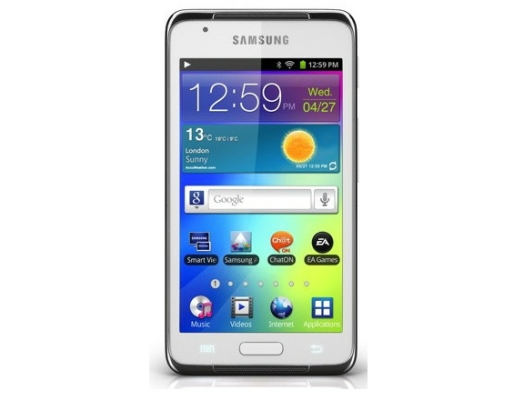 There aren’t many reasons to pick up a Galaxy Player instead of a cheap, unlocked Android phone these days. But if you’re specifically looking for a device that doesn’t have any cellular capabilities at all, you might want to check eBay, Amazon, or other marketplaces for a used or refurbished Galaxy Player. It’ll probably be a much cheaper option than a Sony Walkman F.

Apple’s iPod touch is almost an iPhone without phone calling capabilities. It has a similar display, similar processor, and supports most of the same apps. There aren’t really any Android device makers offering exactly that kind of experience right now — Sony’s Walkman line might come the closest, but even the company’s latest devices don’t have all the same features as the latest Sony smartphones.

But there’s a big difference between the Android and iOS landscape: You can find Android phones that sell for less than the price of an iPod touch, and just use it without a SIM card. If you want a cheap unlocked iPhone, you’re going to have to get one that’s at least a few generations old.

So if you’re in the market for an Android alternative to an iPod touch, my recommendation in late 2013 is to buy a Motorola Moto G or another phone. If you’re looking for something for kids, take a look at the latest devices from Fuhu or Ematic. And if you really want a slightly more adult device, but want one without a cellular radio, you might be able to find what you need from a Sony Walkman or older Samsung Galaxy Player.

But it’d be nice if a few more phone or tablet makers would make decent phone-sized Android devices for folks that don’t want or need to make phone calls.

30 replies on “Android alternatives to the iPod touch”