Acer’s Chromebooks may not be flashy, but they’re some of the cheapest laptops around, with prices starting at about $200. Despite the low price, these thin and light laptops are surprisingly capable little machines — and if you’re not a fan of Google’s Chrome OS software, you can run a full-fledged desktop operating system like Ubuntu.

Michael Larabel from Phoronix installed Ubuntu 13.10 on a $200 Acer C720 Chromebookrecently, and found that the $200 laptop was able to hold its own against machines with much higher price tags. 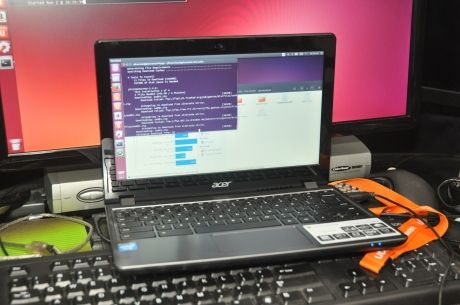 The Acer C720 Chromebook comes in a few different configurations, but the Phoronix tests were run on the cheapest model, sporting an 11.6 inch 1366 x 768 pixel anti-glare display, a 1.4 GHz Intel Celeron 2955U dual-core Haswell processor, 2GB of RAM, and 16GB of storage.

Phoronix found that the Acer C720 could almost keep up with a machine with an Intel Core i5 Sandy Bridge processor in some graphics benchmarks, and was well ahead of older computers with Intel Core 2 Duo chips in many CPU and graphics tests.

Since the Acer C720 is so new, there are still some hardware issues — Ubuntu doesn’t currently support the touchpad, for instance. But you can always plug in a mouse.

Installing Ubuntu or other Linux-based operating system on Chromebooks is usually pretty easy. You just need to enter developer mode and enable support for legacy BIOS (or even use a tool like ChruBuntu which lets you run Ubuntu and Chrome OS side-by-side without rebooting). Unfortunately it’s not so easy to install Windows on a Chromebook, so if you need a cheap laptop running Microsoft’s operating system, you should probably just buy one that runs it out of the box.