Intel is outlining plans for its next-gen chips for smartphones and tablets… as well as the generation after that. Starting in the second half of 2014, Intel plans to start offering 64-bit mobile chips based on 14nm designs and featuring next-gen graphics.

By 2015, Intel plans to move onto an entirely new versatile chip called “Broxton” whcih is designed for easy upgrades and reconfigurations.

In the first half of 2014 we should see next-gen dual-core Atom chips based on the same Silvermont technology currently used in Bay Trail processors.

These 22nm chips will offers up to twice the graphics performance of the company’s current smartphone chips, and up to 1.7 times the overall performance. They’ll be aimed at high-end phones and mid-range tablets.

Why stop at 2 cores when you can have 4? Moorfield is basically a quad-core variant of the 22nm Merrifield chips.

While high performance chips tend to grab the headlines, Intel is also making a play for the low-end smartphone space with a new system-on-a-chip code-named SoFIA. It’ll feature integrated 3G capabilities when it launches in late 2014, and by the following Year Intel plans to have a version with built-in support for 4G LTE networks.

By the second half of 2014, Silvermont will be old hat and Intel will move onto a new 14nm architecture code-named “Airmont.” 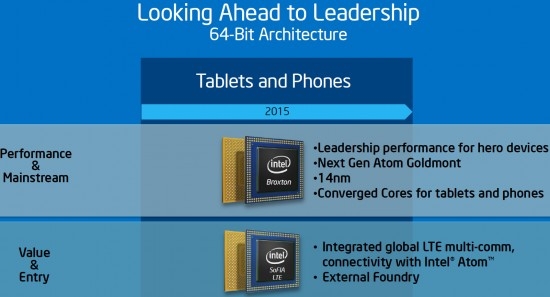 By 2015, Intel plans to roll out chips based on a new “Goldmont” architecture. Broxton chips will have a chassis which lets Intel connect other parts, allowing Broxton chips to be changed or customized. This’ll let Intel roll out new variations of the chips for different markets more quickly.

Intel also describes these chips as offering “converged cores” for both phones and tablets,