Google is rolling out a whole slew of updates to its mobile apps and services. A week after launching Android 4.4 KitKat, the company is updating a number of its Android and iOS apps including Voice, Hangouts, and Drive.

Here are some of today’s highlights. 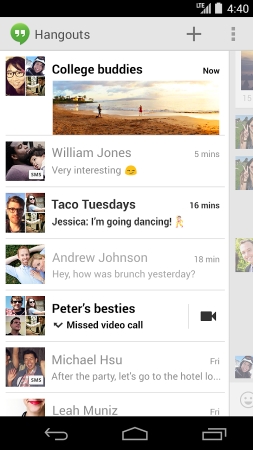 Android phones typically come with two different messaging services, a Messaging app for SMS and MMS and a Hangouts or Talk app for chat and video calls.

Recently Google announced that it would merge those functions and the Nexus 5 is the first smartphone to ship without a separate Messaging app. Instead you can manage your SMS messages using Hangouts (or a third-party app).

Now the new Hangouts app is available to all. You can download it from the Play Store. Note that for now if you have a chat conversation and an SMS exchange with the same contact, it’ll show up as two different conversations in Hangouts, which means it’s still almost like having two separate apps.

Google Voice hasn’t seen many updates recently, but that’s starting to change. The company plans to expand support for MMS messaging to Google Voice, and T-Mobile has announced customers can now receive MMS messages through a Google Voice number.

Sprint customers have already been able to use this feature, which dumps MMS messages into your Gmail inbox and optionally sends you a notification via SMS.

There’s no word on when AT&T, Verizon, and other carriers will follow suit.

Google is rolling out a new version of the stock keyboard app for Android, bringing some of the features that had previously only been available to users with phones or tablets running Android 4.4 KitKat.

The new app adds support for emoji, space-aware gesture typing, and a few other changes.

Want to use more than one Google Account to access documents and files on an iPhone or iPad? Now you can do that.