CheapCast is an app designed to pretty much turn any Android device into a Google Chromecast. Up until now, that’s meant you could fire up Netflix, YouTube, or other supported apps on your phone or tablet, tap a button and then send it to the device running CheapCast.

But there’s one thing you’ve been able to do with Google’s $35 Chromecast device that wasn’t supported with CheapCast… until now. That’s “tab casting,” or mirroring the contents of a Google Chrome web browser tab.

Now the developer of CheapCast has updated the free Android app with support for tab casting, among other things. 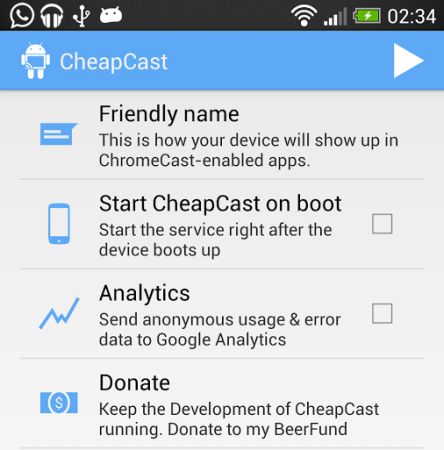 When you stream video from Netflix, YouTube, Google Play Movies or other sites to CheapCast (or Chromecast), you’re kind of using your phone or tablet as a remote control — but audio or video actually streams straight from the internet, not from the device you’re using as a controller.

But tab casting works over your local network and lets you stream nearly anything in a browser tab as long as you’ve installed the Google Cast extension for Chrome. For instance you could stream video from Amazon or other services that wouldn’t normally work. Or you can stream presentations from Google Docs, or pretty much anything else that you can access in a web browser.

The updated app is also now powered by Google Chromium, the open source version of Chrome.

Cheapcast is available as a free download from the Google Play Store, but you can donate to the developer through an in-app purchase if you want to help support the app.