Samsung’s been working on flexible display technology for a few years — and while it’ll be a while before you can actually roll up a phone and stick it in your pocket, the company has unveiled its first phone with a curved display.

The Samsung Galaxy Round sports a 5.7 inch, 1920 x 1080 pixel display with a slope so that the edges are higher than the center. It’s expected to launch in South Korea soon, where it iwll be available from SK Telecom. 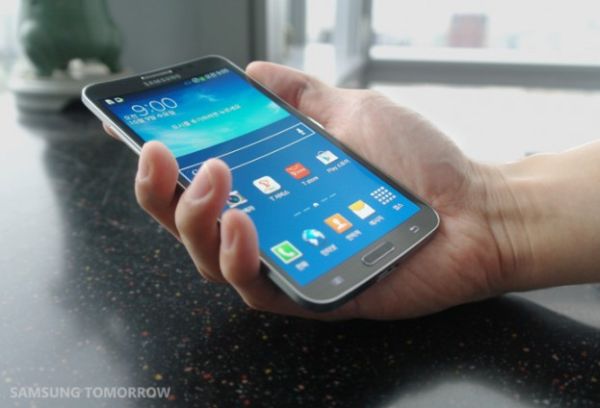 The rest of the phone is slightly round too, which lets you treat it like a rocking chair while the phone is flat on a table. Samsung has even built in a software feature called the “Roll Effect” that brings up time, weather, and other notifications when you push down on one end of the phone so that the screen rolls up toward you.

Theoretically the curved phone might be a little more comfortable to hold in your hand, since your hand isn’t exactly flat either. It would make at least as much sense to have phone curve length-wise rather than width-wise so that it fits more comfortably along your face when making phone calls… but who uses phones to make calls these days?

The Galaxy Round features a 2.3 GHz quad-core processor, 3GB of RAM, a 13MP rear camera, and Android 4.3 software with Samsung’s TouchWiz user interface.

For the most part, it has the specs of a decent, high-end phone… it’s just rounder than most.