The Samsung Galaxy Gear may be the highest profile smartwatch released to date. For $300, Samsung promises to deliver a wearable device that lets you interact with your phone to view notifications, make calls, monitor fitness stats, or perform other actions thanks to its custom Android operating system with support for apps.

It even has a camera built into the strap.

The first reviews are in, and by and large the answer seems to be no. 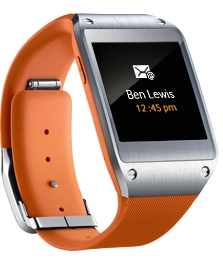 Samsung’s smartwatch is supposed to get up to 25 hours of battery life, but many reviewers struggled to get half that much run time. The display isn’t always on, which means that you might have to wait a second to actually see the time… on your wristwatch. And operating the thing can be awkward.

The biggest problem is that the Galaxy Gear needs to be paired with a smartphone to actually do much of anything, and right now it only works with a single phone: The Samsung Galaxy Note 3. Soon it’ll also support the Galaxy S4 and other Samsung devices, but it’s not nearly as versatile a solution as some other smartwatches.

There are a lot of ways Samsung could improve its smartwatch, some of them involving software updates (which means that this device could get better after you buy it), but others would probably require new hardware — a low-power E Ink display could do a lot for the watch’s battery life and outdoor visibility, for instance.

Here are some highlights from recent reviews. Click the links for more details.

The Galaxy Gear has an 800 MHz processor, a 1.63 inch, 320 x 320 pixel AMOLED displays, a 1.9MP camera, 4GB of storage, and 512MB of RAM. It has 2 mics, for noise cancellation purposes, and a single speaker. It also has an accelerometer and gyroscope which, among other things, helps the device know when to turn on the display when you raise your arm to look at the watch.