Dell is set to launch a new range of tablets at an event in new York on October 2nd. The company has already said that at least one model would be an 8 inch tablet called the Dell Venue that would run Windows 8.

But it looks like the company could have a Dell Venue 8 Android tablet as well. 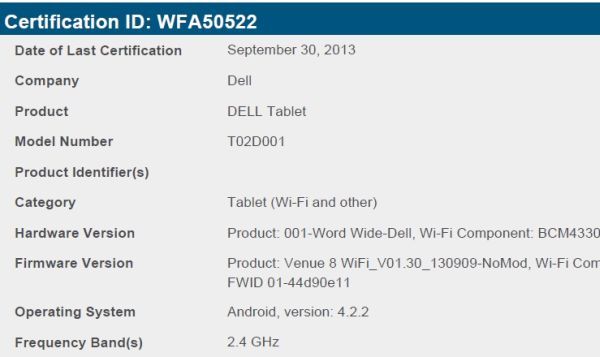 According to The Droid Guy, a device called the Dell Venue 8 running Android 4.2.2 Jelly Bean software received WiFi certification this week. Aside from the fact that it supports 802.11b/g/n WiFi, runs Android, and has the number 8 in its name, there’s not much we know about the tablet at the moment.

Leaked leaks and benchmark results also suggest Dell is working on tablets with 10.8 inch displays. The Dell Venue 11 is expected to have a Qualcomm Snapdragon processor and Windows RT software, while the Dell Venue 11 Pro has an Intel Atom Bay Trail chip and runs Windows 8.1.

We should know more about these devices after Dell’s event on October 2nd.