Ubuntu 13.10 is scheduled to launch in mid-October, and it’ll be the first version of Ubuntu to ship with full support for phones and tablets as well as desktops, notebooks, and servers. But Ubuntu Touch is still very much a work in progress, and while it shares some design elements with the desktop version of the popular Linux-based operating system, most Ubuntu apps are still designed to be used on a PC, not a phone or tablet.

Ubuntu community manager Jono Bacon is hoping to change that by the time Ubuntu 14.04 rolls out in six months. 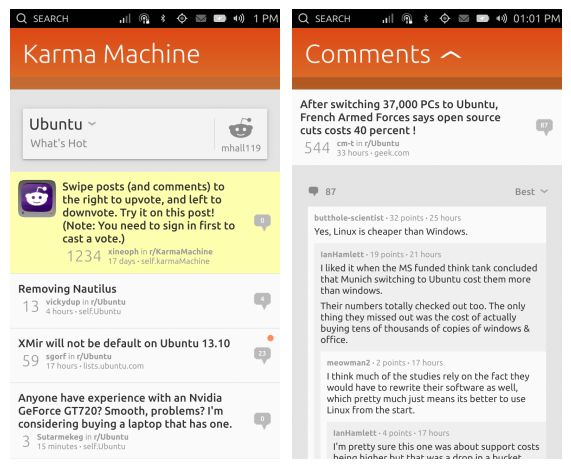 He’s encouraging developers to start writing apps that have desktop and phone user interfaces. That means you could eventually be able to run an app on your desktop using a keyboard and mouse, while using the same app on your phone with only touchscreen controls.

It’d be sort of like visiting a website (such as Liliputing) that has a multi-column layout when you’re on a device with a big screen, and a single-column view when you’re using a smartphone or other small-screen device.

For instance, there’s a reddit app for Ubuntu called Karma Machine which won the 2013 Ubuntu App Showdown. On a phone it lets you scroll through the latest items on the social news site using your fingertips, but in desktop mode it looks a bit more like a classic email client, with headlines on the left and comments on the right. 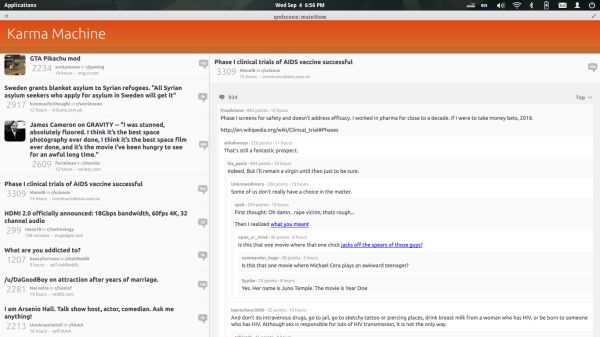 There are already thousands of desktop-only apps available for Ubuntu. It’ll probably take a long time for the number of mobile-friendly apps to come anywhere close to catching up. But if Canonical is serious about making sure its software runs on phones and tablets as well as it does on desktops and laptops, it needs to encourage developers to bring more mobile-friendly third party apps into the fold… and focusing on single apps that can run in both modes seems like a smart way to do that.