The Mad Catz M.O.J.O. is an Android-powered device that you can plug into a TV to play Android games on a big screen. But it turns out you won’t be limited to Android games — Mad Catz plans to offer a software update after launch which will let you stream games from a PC to your TV.

That could help justify the $250 asking price which Mad Catz revealed earlier this week.

The M.O.J.O. costs about 2.5 times as much as a $99 Ouya game console, but not only does it have a faster processor and more RAM, it could be a sort of media extender for your PC gaming rig.

and it’s expected to ship in the first half of December. 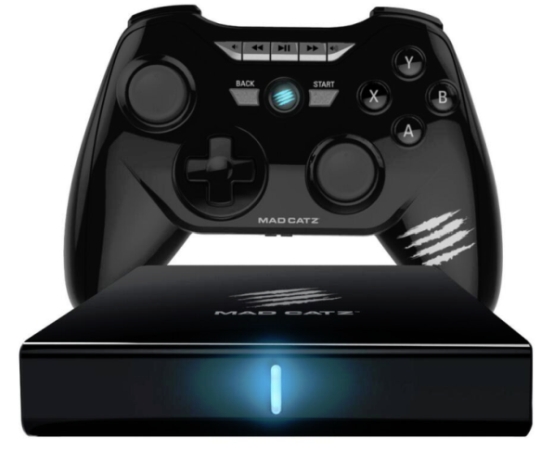 So it’s not surprising that the M.O.J.O. can perform one of the Shield’s coolest tricks. If you have a PC with a supported NVIDIA graphics card, you’ll be able to stream games over your home network. That means the game will actually be running on your PC in the office, bedroom, basement, or wherever — but you’ll be able to play in front of your TV while using a wireless game controller.

While $250 still seems like a lot of money for an Android gaming device (it’s more than the price of an Xbox 360), it’s probably cheaper than building a second gaming rig and sticking it next to your TV.

It’s also about $50 cheaper than the price of an NVIDIA Shield — although the Shield is a portable device with a built-in 5 inch display and a battery, two things the Mad Catz micro-console lacks.

At launch the M.O.J.O. will feature the Google Play Store and NVIDIA Tegra Zone, allowing users to download Android games. You’ll have to wait for a software update to get PC game streaming.