Lenovo’s expanding its Yoga line of flexible products with two new Android tablets. The Lenovo Yoga Tablet doesn’t convert from a tablet to a notebook like its Windows-powered siblings, but Lenovo says you can use a Yoga Tablet in three modes: hold, tilt, and stand.

Lenovo will offer 8 and 10 inch models for $249 and $299, respectively. The 8 inch model is available exclusively from Lenovo.com and Best Buy starting October 30th, with the 10 inch model available from a wider ranger of retailers.

Lenovo is also offering a Bluetooth keyboard cover for the 10 inch model for $69. 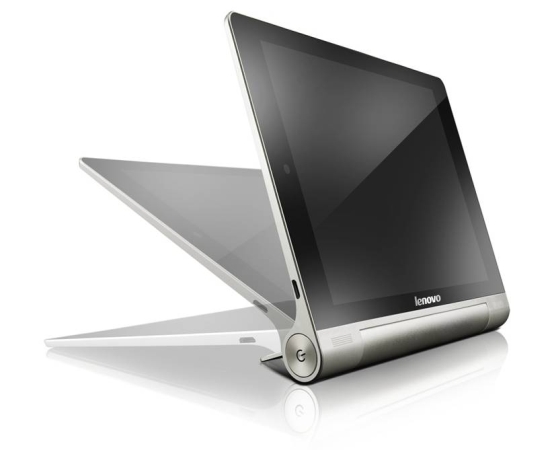 While there’s no built-in keyboard, the tablet is designed to be used in your hands or on a tablet thanks to a small kickstand built into the side of the case. It doesn’t stick out as far as a normal kickstand, thanks to a design that places the center of balance on the tablet closer to the thick end where the battery hangs out (and where you’d most likely grip the tablet).

The stand lets you prop the tablet up on a table in stand mode — the stand is adjustable to let you fit angles from 110 to 135 degrees. You can also lie it down on a table, using the same kickstand to prop up the tablet at a gentle angle in tilt mode for gaming or typing.

And of course you can hold the tablet in your hands. 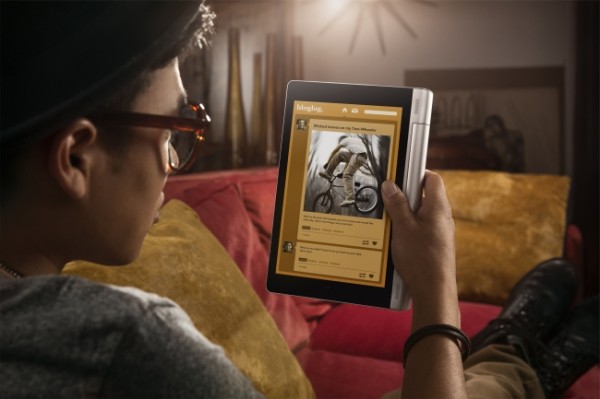 Both the 8 and 10 inch Yoga Tablets feature 1.2 GHz MediaTek MT8125 quad-core processors, 1280 x 800 pixel displays with 178 degree viewing angles, 1GB of RAM, and 16GB of storage. There’s also a microSD card slot for up to 64GB of additional storage space and a microUSB OTG port. They both run Android 4.2 Jelly Bean software.

The tablets have stereo front-facing speakers, a 5MP rear camera and 1.6MP front-facing camera, WiFi, Bluetooth, and a headset jack and built-in mic with noise cancellation. In some regions there will also be 3G capable models with a micro SIM card slot. 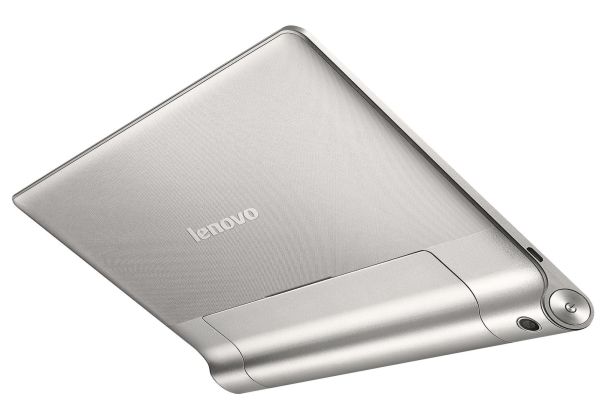 Lenovo says the tablets get up to 18 hours of battery life… in reading mode. That suggests you’ll have to disable WiFi and possibly some other features to get that kind of battery life. But that long battery life claim compares rather favorably with Amazon’s claim that you can get up to 17 hours of reading time on the latest Kindle Fire tablets under similar conditions.

You can also connect your smartphone to the microUSB port to charge your phone using the Yoga Tablet’s large battery.

While the Yoga Tablets are brand new in the US (and Lenovo is kicking off the launch with a webcast featuring Ashton Kutcher), they actually started showing up in Europe earlier this month.