Dell’s new Android tablets, the Venue 7 and Venue 8, aren’t as exciting as some of the other products unveiled this week. They do have one claim to fame: Intel inside.

Both tablets have Intel Atom processors where most Android tablets utilize ARM-based chips. Another big plus is price. The Venue 7 costs just $150 and the Venue 8 is $180.

Tablets that cost under $200 aren’t always worth the money — but these days cheap tablets don’t always feel cheap. After spending a little time with Dell’s new Android tablets, it looks like they at least make a good first impression. 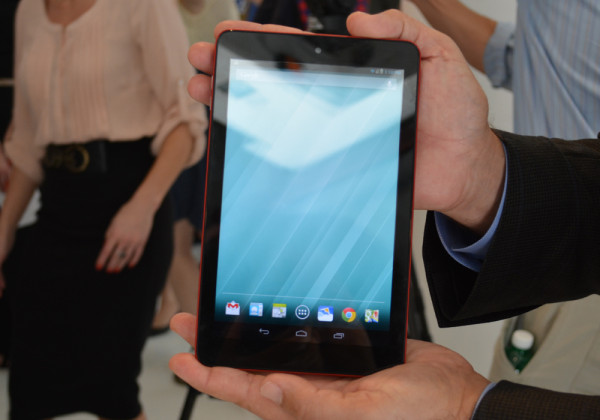 The Venue tablets are thin, the right weight for their size, and narrow enough to hold in one hand. The Venue 8 is a bit less comfortable than the smaller one in that regard, though still highly holdable. The rounded edges, matte back, and (in one case) nice colors make it as nice to look at as to hold. And the displays look great on first inspection.

The lighting in the demo area wasn’t the best, so no matter which angle I viewed them there was always something reflecting off the glossy surface. I did not note any color distortion or anything else to mar the basic viewing experience. Neither tablet is the most pixel dense you can find, but the 1280 x 800 HD resolution is acceptable on this size screen and in this price range.

The limited number of apps on the demo units didn’t make it possible to go beyond basic impressions of the performance. Framerates are smooth enough, apps opened quickly, and the screen responded without lag.

I don’t have much doubt that an Atom processor can handle Android. I’m more concerned with whether owners will be able to load their favorite apps — some aren’t made to work with this type of chip (Ed’s note: although the percentage of apps that are incompatible with Intel is smaller than it used to be). It will be interesting to see if Dell puts out any messaging around that.

The rear cameras (5MP on the 8 and 3MP on the 7) don’t take very impressive pictures. They’re good enough for scanning barcodes and doing augmented reality stuff–not too noisy/dark and responsive, even in odd lighting.

These are pretty standard Android tablets without a lot of flash and bling and there’s not a thing wrong with that. The big question is: 7 or 8 inch? With all other things equal, I prefer the Venue 8. I like that it comes in red, and I enjoy having more screen real estate. It still costs less than the Nexus 7 and the Kindle Fire HDX.

Which do you prefer?