Dell’s new Venue 11 Pro Windows 8.1 tablet is gunning for the Surface 2/Pro 2 big time. It’s about the same size, works with a couple of different keyboard docks/covers, and supports active pen input. It does all this while coming off as lighter and more comfortable to hold.

The specs aren’t exactly the same, but I still suspect that many shoppers are going to compare these two tablets very closely. Having had some hands-on time with both, I’m more intrigued by the Venue 11 Pro. 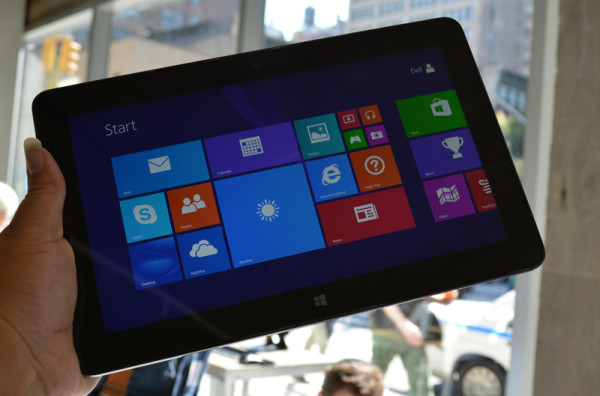 The first thing I noticed when picking up the Venue 11 Pro is that it feels much lighter than the Surface Pro 2. It starts at 1.6 pounds for the Intel Atom version and the Core i version doesn’t quite get up to the Surface’s 2 pounds.

The rounded edges make it more pleasing to hold. The balance is also just right. This is impressive given that the Venue 11 has a slightly larger display–10.8 inches instead of 10.6.

The resolution is the same as the Surface Pro 2: full HD 1920 x 1080 pixels. The IPS display does seem to have wide viewing angles, though the light was very bright in the demo area and thus the glossiness got in the way no matter how I tilted it. The touchscreen is appropriately responsive and didn’t attract too many smudges and fingerprints despite being handled a lot.

Another big difference is the range of configurations that will be available. You can get the Venue 11 Pro with quad-core Bay Trail Intel Atom, dual-core Intel Pentium, or dual-core Haswell Core i3 and i5 chips. The Atom/Pentium version has a slightly different chassis, though the main difference you’ll see between them all is in performance.

Like the Surface Pro, the Venue 11 supports stylus input. Unlike the Surface, the pen isn’t included, it’s an extra (no price yet). There’s no place to store the pen in the tablet. Dell claims that this is because they wanted to concentrate on making the stylus feel like a real pen and not compromise on the experience. The pen’s too thick to easily fit inside the case even if there were a slot for a stylus.

The pen does feel good in the hand. The technology is from Synaptics, not Wacom, and the pen itself requires a battery. The tip glides well across the display and, in the short time I had to test it, the screen felt very responsive. 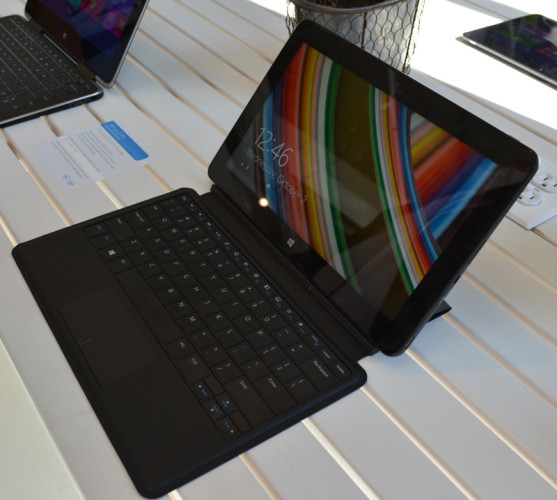 Also notable are the two keyboard covers/docks Dell made for the Venue 11. One is similar to the Type Cover for the Surface tablets. It’s very thin and doubles as a cover, and the keys depress to give you a more traditional typing experience. Unfortunately, the keys don’t feel that nice when you type. It’s very plasticy and hollow and unpleasant. It’ll be fine for short typing, but not so great for longer sessions.

Then there’s the keyboard base. This one is just like the bases for convertible tablets in that it makes the Venue 11 feel like a small ultrabook. The base adds keyboard, touchpad, and doubles the battery life (Dell claims you should get 17 hours when using the keyboard and tablet together), but does not add extra ports.

That’s a missed opportunity. Even though Dell has another accessory for docking and using the Venue 11 Pro more like a traditional computer, I still think a dock that turns it into a more laptop-ish computer should expand the port selection. 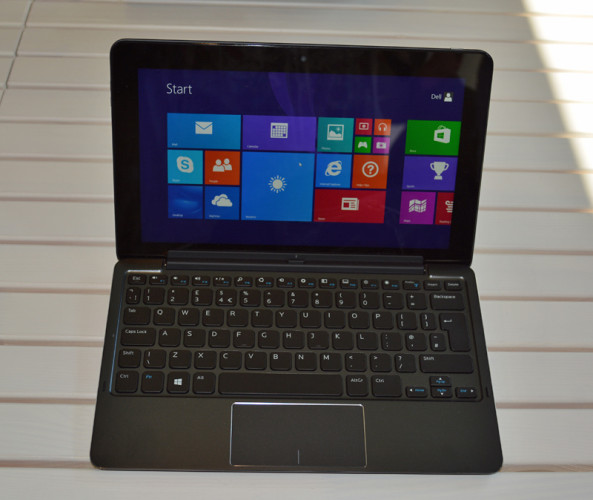 With this dock, the Venue 11 exceeds netbook average weight by a bit but doesn’t come off as too heavy. This combo is heavier than the Surface Pro 2 plus the battery-enhancing type cover, though. The keys offer good tactile feedback and return, plus the touchpad is wide and responsive.

The Venue 11 Pro may not be the grand slam Windows tablet Dell wants it to be but it should give people considering the Surface 2 and Surface Pro 2 a reason to hold off until both tablets are available. The fact that you get a range of processor choices is a big deal in itself. Plus, the $500 Atom model is only $50 more than the Surface 2 and runs full Windows 8.1, not RT. There’s no pricing on the Haswell models just yet. Chances are that it will be comparable with the $900 Surface Pro 2.