Word on the street is that Google could officially unveil the Nexus 5 smartphone as soon as next week, although it might not be available for purchase until later in October or even mid-November.

But while you’re waiting to hear more about the price and release date, folks continue to leak just about everything else there is to know about Google’s upcoming phone. Now the folks at Italian site TuttoAndroid have posted new images of the phone, along with its Android 4.4 operating system. 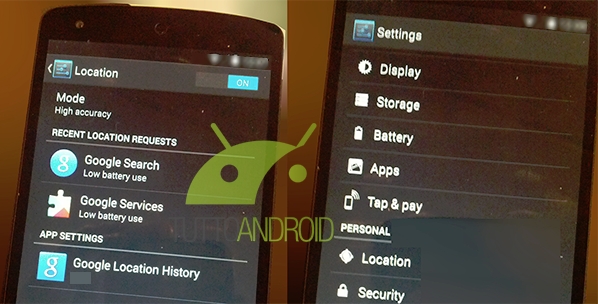 For the most part the pictures confirm previous rumors. For instance, it looks like the icons in the notification area will be white (or possibly customizeable). There’s a new Tap & Pay option in the settings area which suggests Google Wallet functionality will be built into the operating system (at least for phones with NFC capabilities).

Google Cloud Print is also reportedly built into the operating system, making it easier to send content straight from your device to an internet-connected printer.

The phone itself is described as a little bigger than the Nexus 4, but very light.

According to earlier reports, the smartphone will have a 5 inch screen, a Qualcomm Snapdragon 800 quad-core processor, a full HD display, an 8MP camera, 2GB of RAM, and 16GB to 32GB of storage. It’s expected to be built by LG and could sell for around $299 and up, just like last year’s model.

Update: TuttoAndroid has also posted a bit of a tour of Android 4.4, showcasing a new lock screen, a transparent background for the app drawer,  a more responsive Google Now and Google Search, SMS integration in Google Hangouts, and other improvements. 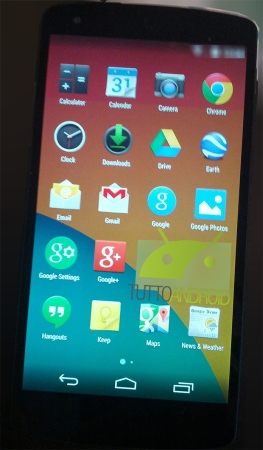 One reply on “Even more leaked Nexus 5, Android 4.4 photos”